So far this season I've been having a lot of fun catching and eating new species of fish, including black crappies, sea robins, and now skate!

In this post we'll touch upon how to catch skate (it's pretty easy), how to fillet and clean skate, and how to make pan fried skate wing.

I'm happy to report that I will be eating skate a lot more often, and I may even start fishing skate by specifically targeting them (instead of just catching them as by-catch).

Please scroll below to learn more!

Not all skate species are legal to catch. For example, it's illegal to fish for smooth, barndoor and thorny skates.

However, those species typically inhabit very deep water, and are therefore not often encountered by inshore recreational anglers.

Little skates are the skates most often caught while fishing inshore. The population of little skate is considered to be healthy, so it's A-OK to bring these skates home to eat.

Fishing for skate is not something most anglers do. Instead, skate are caught as "by-catch" while targeting other bottom dwelling species, such as fluke (shown below 👇). 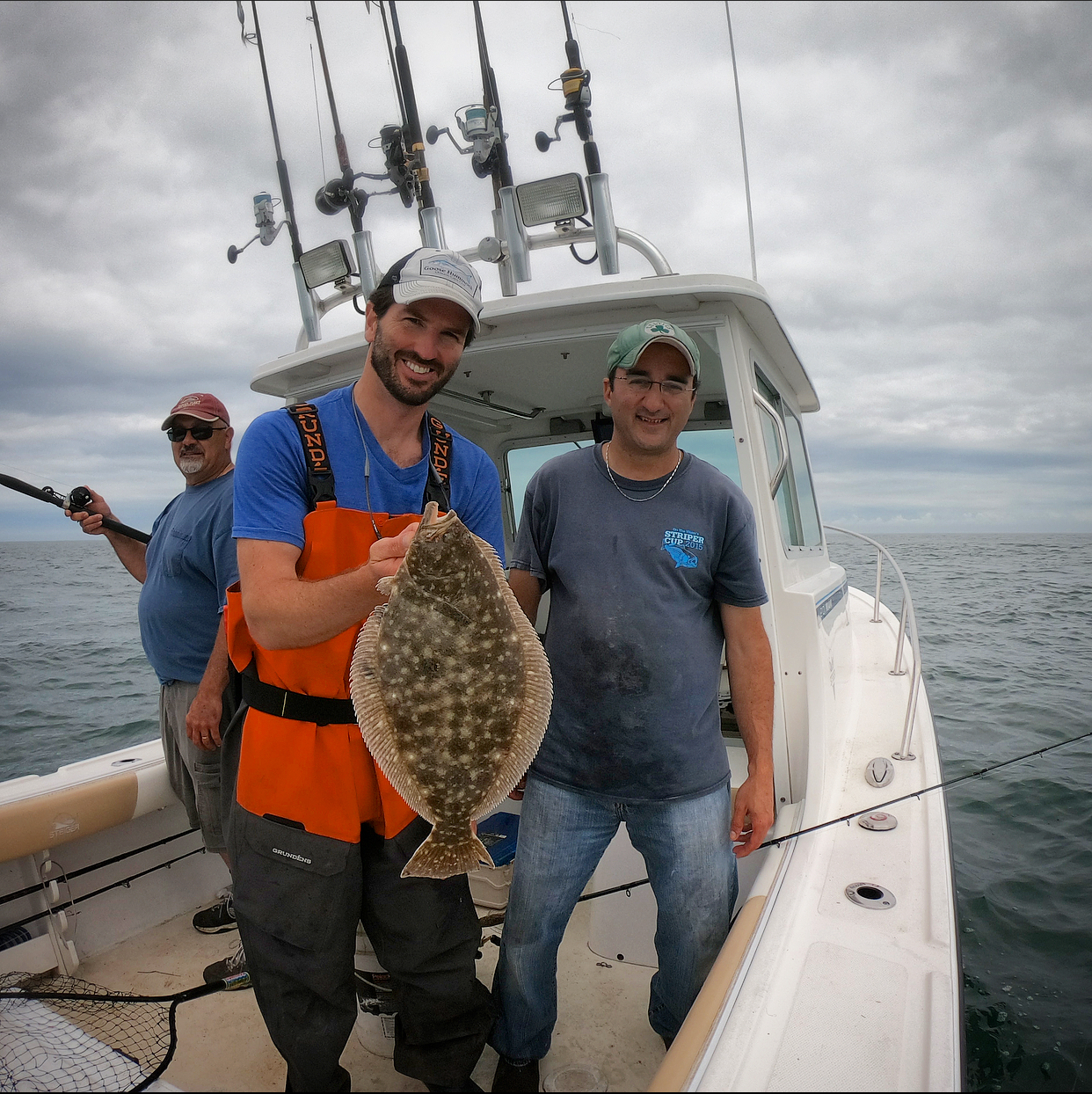 Bottom fishing for fluke is exactly what I was doing on July 19th when a skate attacked my Monomoy Tackle Spoon, which I was fishing right along the bottom.

During this trip I was fishing with My Fishing Cape Cod member Eddy Kooyomjian and his brother Mark. We were fishing for fluke the shoals to the southeast of the Outer Cape. 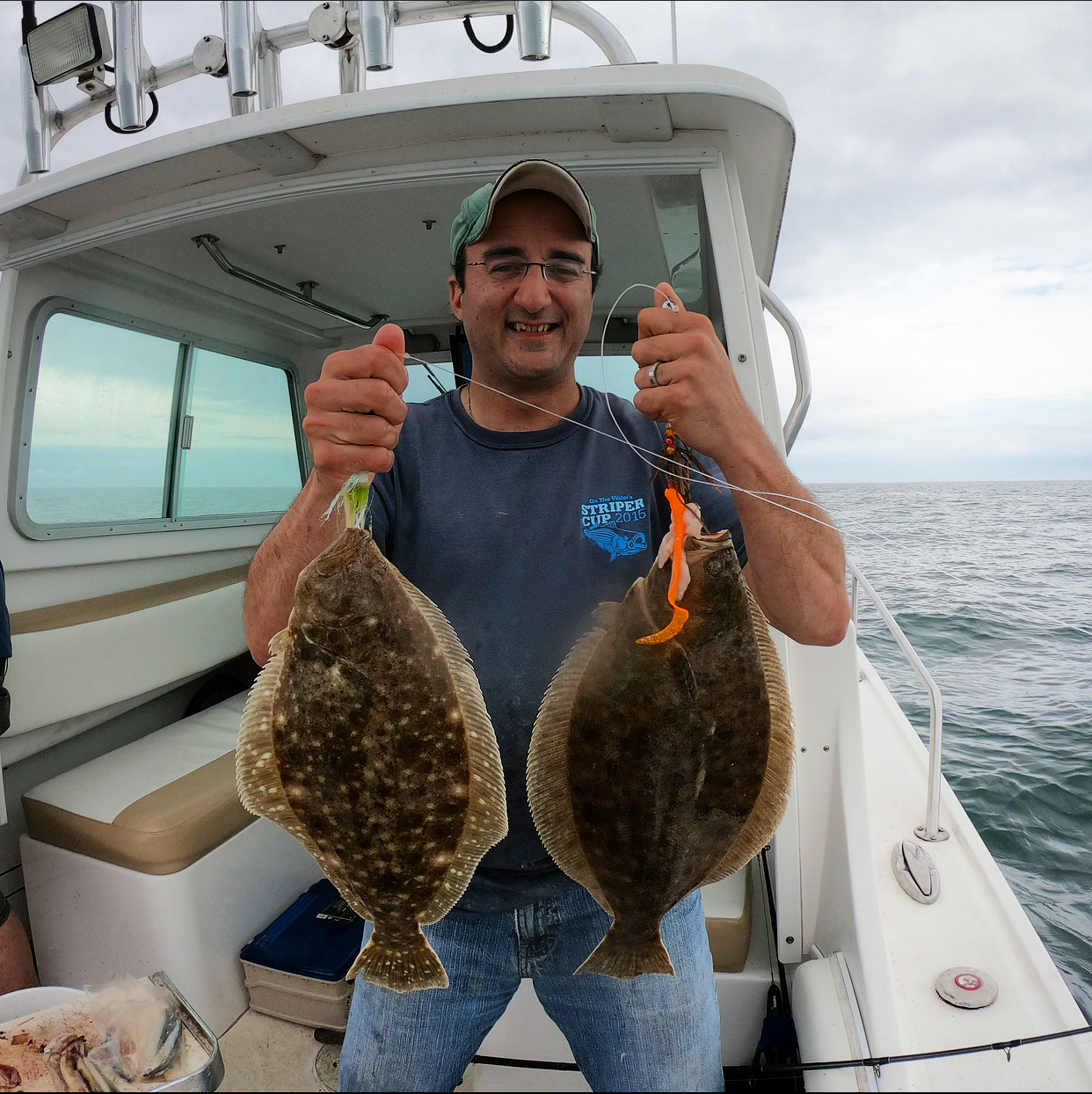 In addition to catching fluke, we also caught plenty of skates!

In fact, I was even able to film a skate bite on camera and you can watch it all unfold right now by clicking play below!

The body and mouth of the skate is designed for bottom feeding, so skate fishing will be most effective when your lures or baits are fishing right on the bottom.

In other words, fishing for skate in the upper part of the water column using swimming plugs and poppers is simply not going to work.

How To Clean Skate 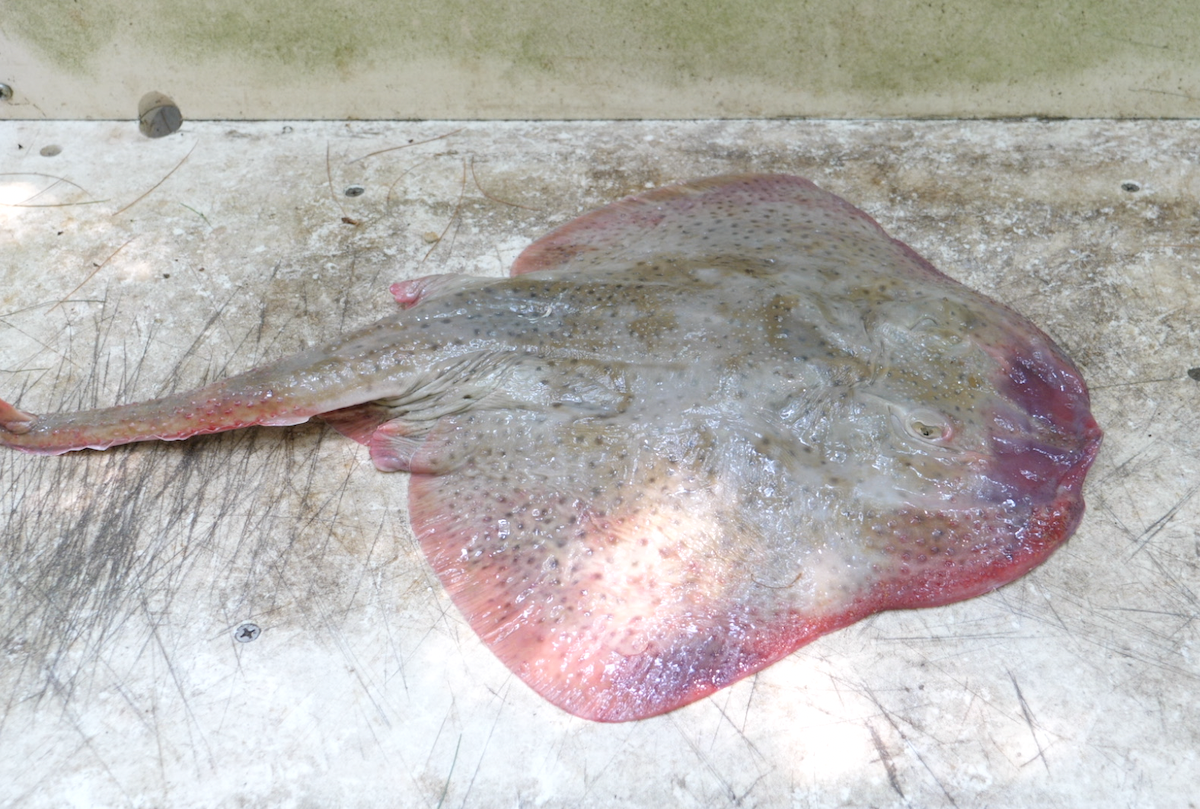 Learning how to fillet skate is surprisingly simple and easy. Out of each skate you will receive two meaty skate wing fillets.

To fillet skate, you will first want to gather the following items:

Cleaning skate is easier than you may think!

You can click play below to watch my skate filleting video, or scroll down for written instructions.

1) Using the fillet knife, carefully remove the wings of the skate. Next time I will probably try leaving the wings on, as shown in this video.

2) Make a small incision and begin cutting off the skin.

3) Tear off the layer of skin using the pliers and the dry rag. Next time I might try leaving the midsection of the skate in tact and using that as leverage, as shown in this video.

4) Do the same to the bottom half of the skate wing.

5) Carefully separate the white meat from the cartilage.

Skates are very slimy and their skin is very prickly, so I definitely recommend wearing gloves.

This was the first skate I ever filleted, so please keep that in mind! In the video I am using a 6" Dexter filet knife to cut down the wing of the skate. 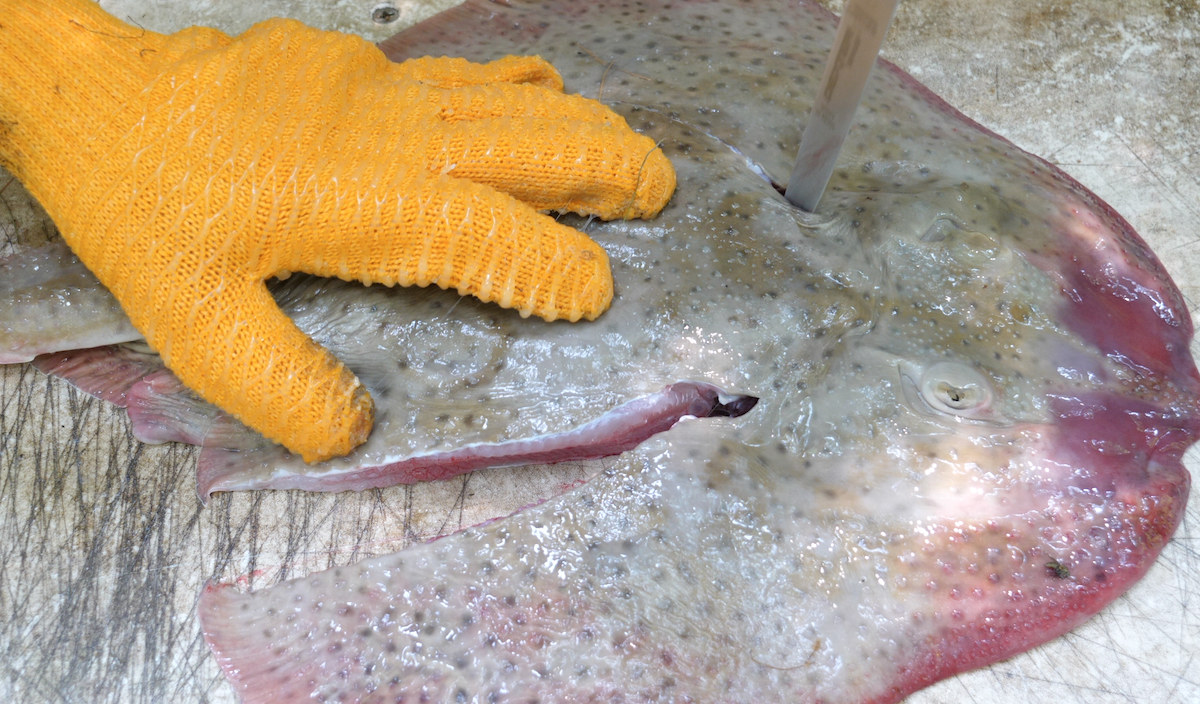 The skate has a "soft spot" between the wing and the body, so the knife just kind of falls into place.

The next skate I filet, I'm actually going to leave the head on and use it as a grip for removing the skin, as shown in this YouTube video. 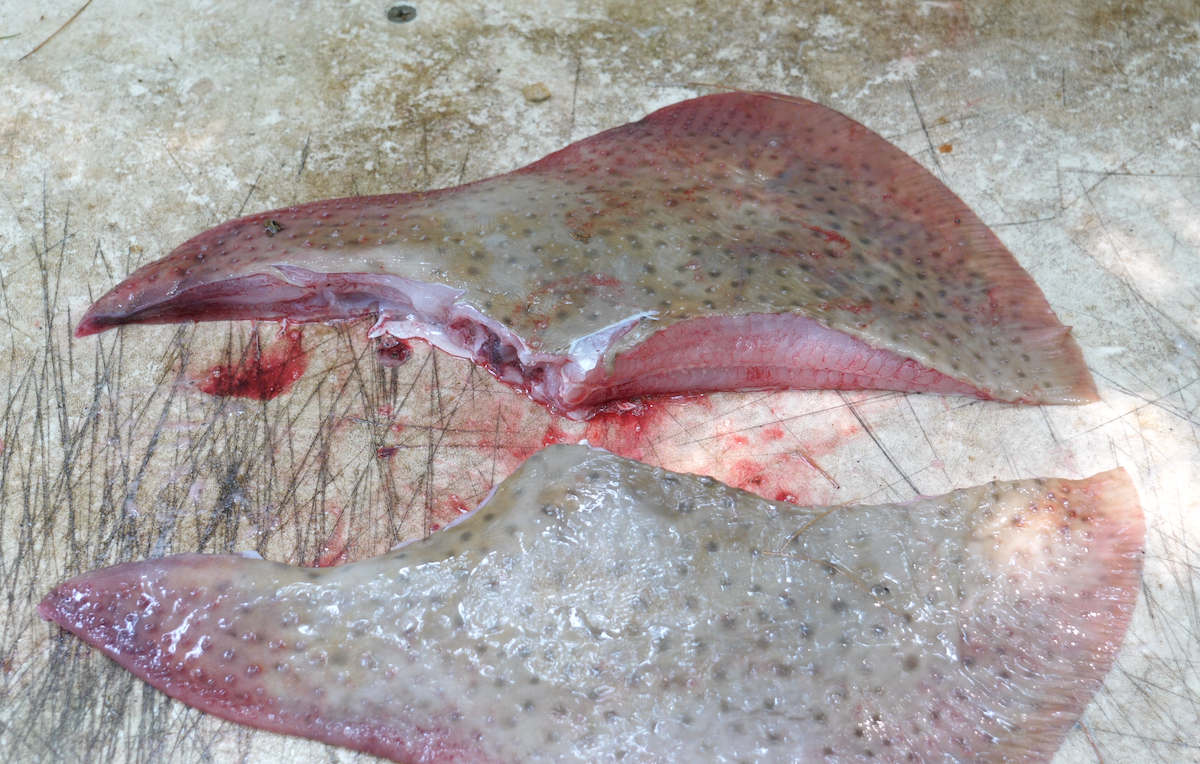 To remove the skate's skin, first get it started by carefully running your filet knife between the skin and the filet. 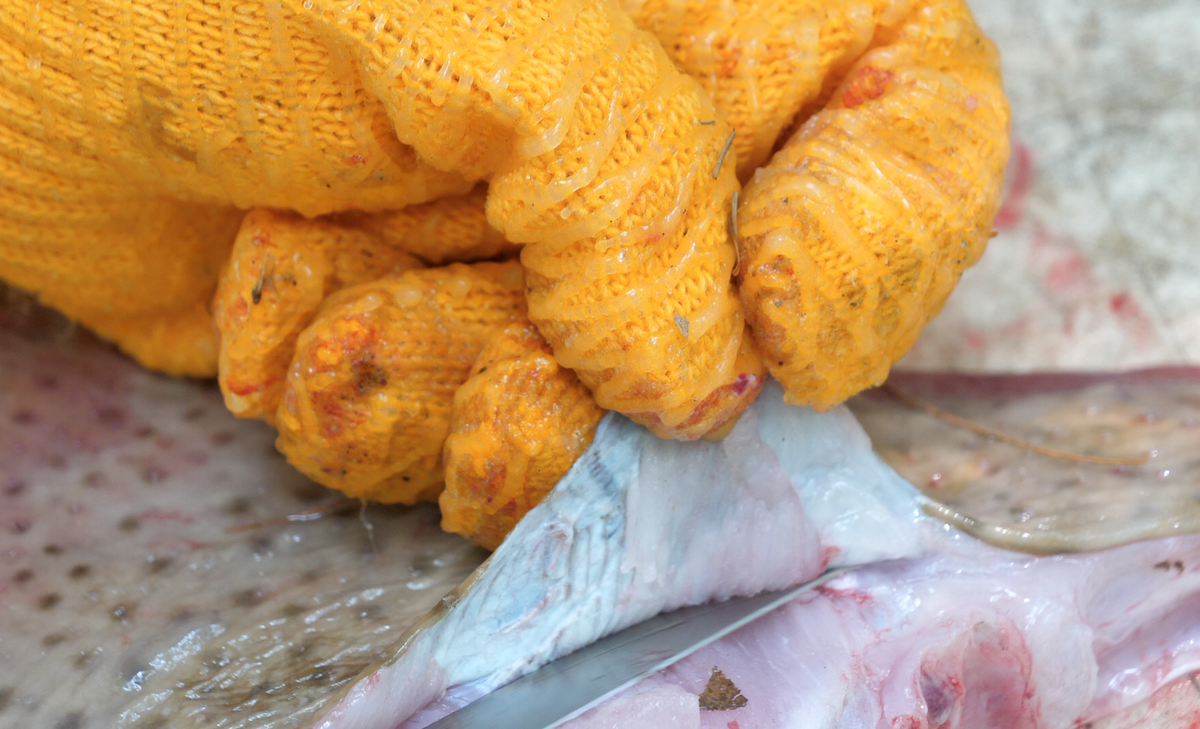 Very, very carefully pull back the skin and then grab a pair of pliers.

I'm actually going to use like a wrench-type set of pliers next time, which i think will do a better job than needle nose pliers. A dry rag can be used to get a good grip. 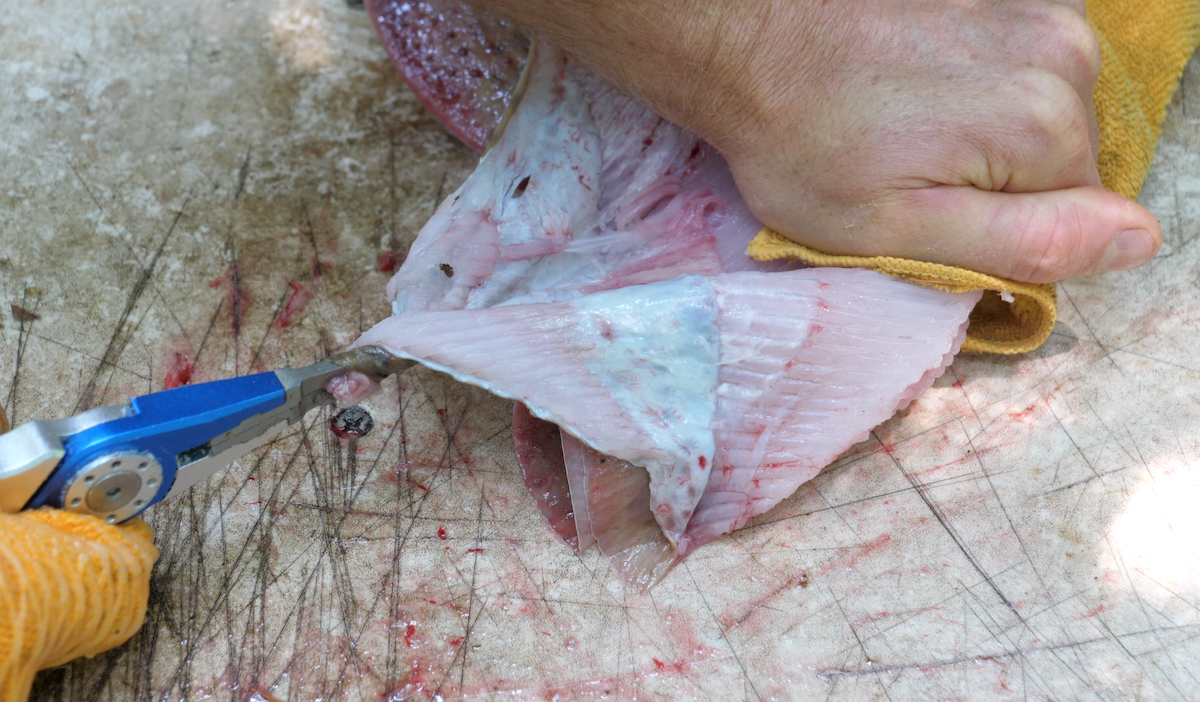 Pull back on the pliers and hold the fillet steady with the dry rag. It will probably take you several tries before you're able to remove all the skin from the skate wing fillet.

Eventually, with enough effort, you'll get the skin off. Now you can use the knife to remove any extra tidbits of skin that are leftover. 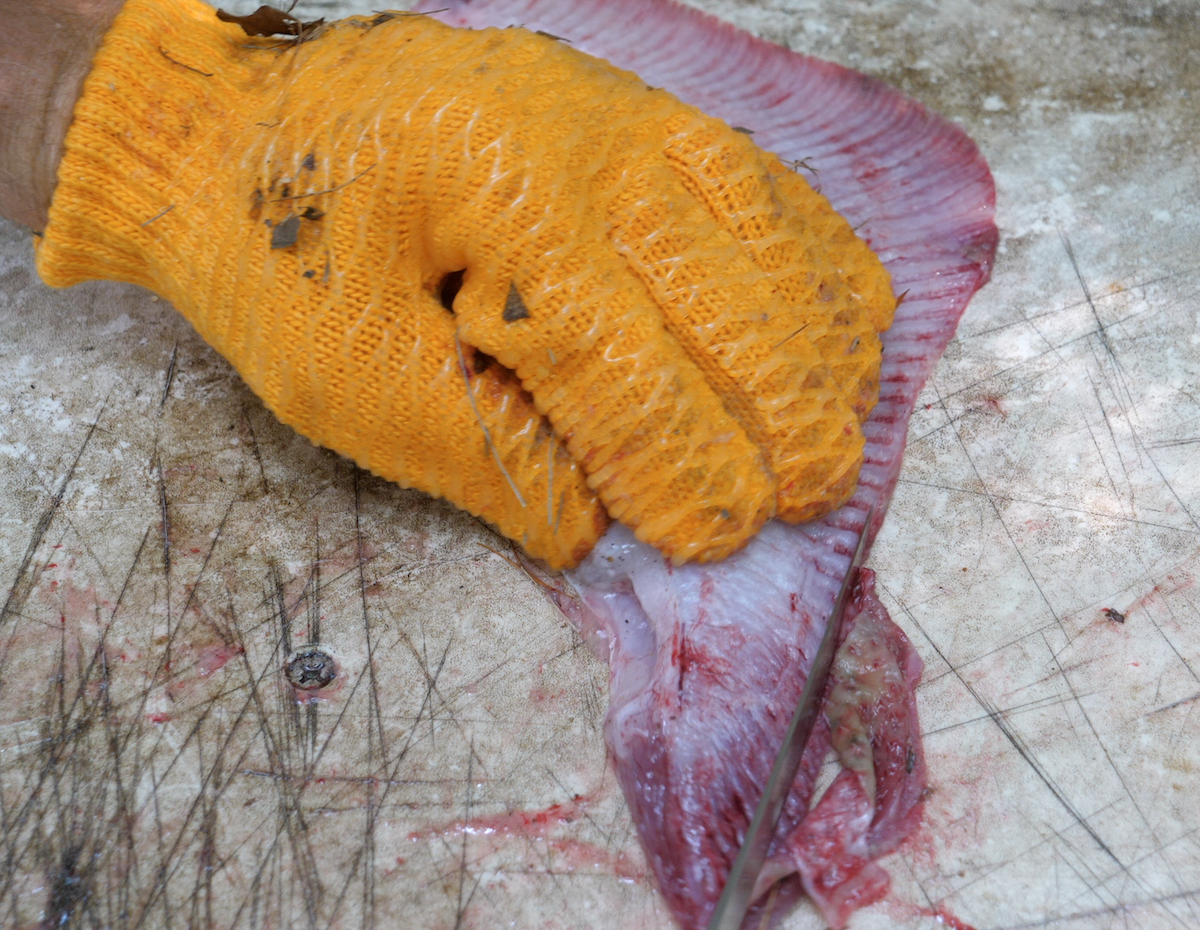 Repeat the process on the underside of the skate wing. 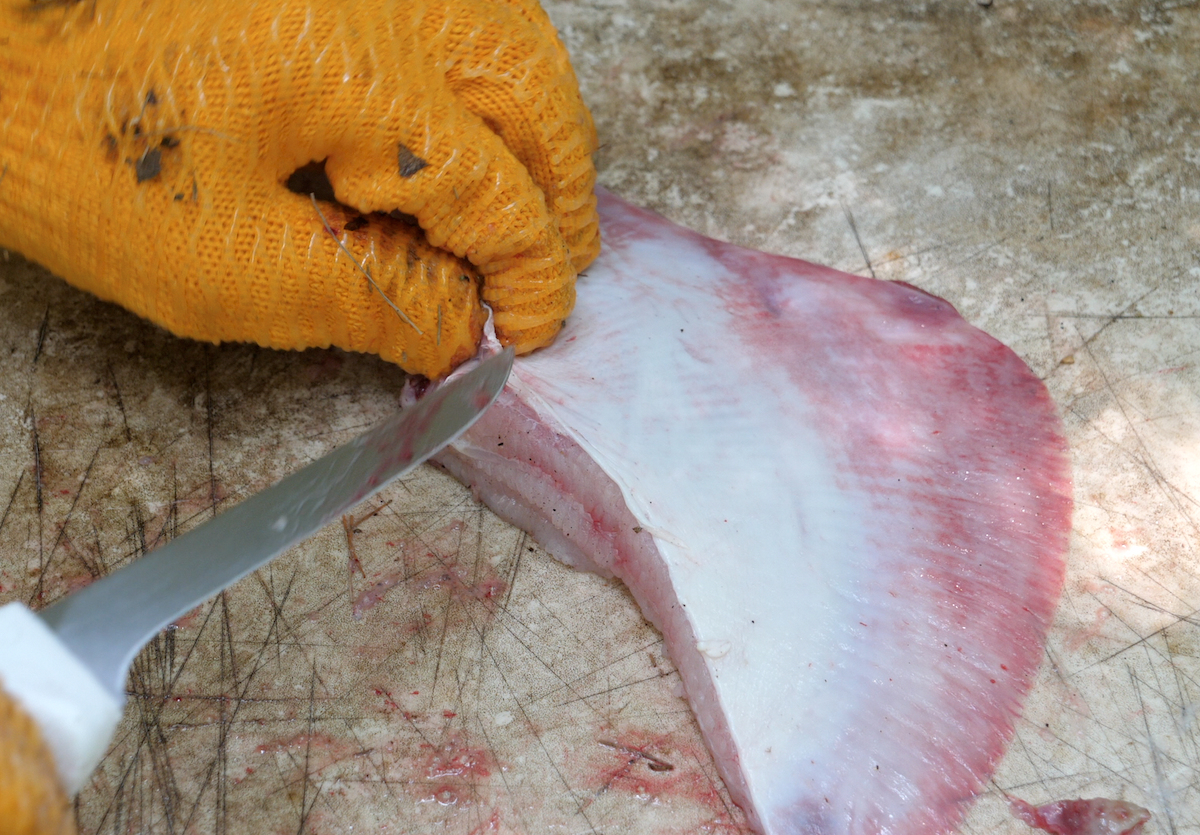 The best tip I can give is to go slow and try to do as good of a job as you can. People run into a lot of filleting trouble when they rush it.

Once you have the fillet separated from the skin, take you knife and remove any leftover cartilage from the skate wing. 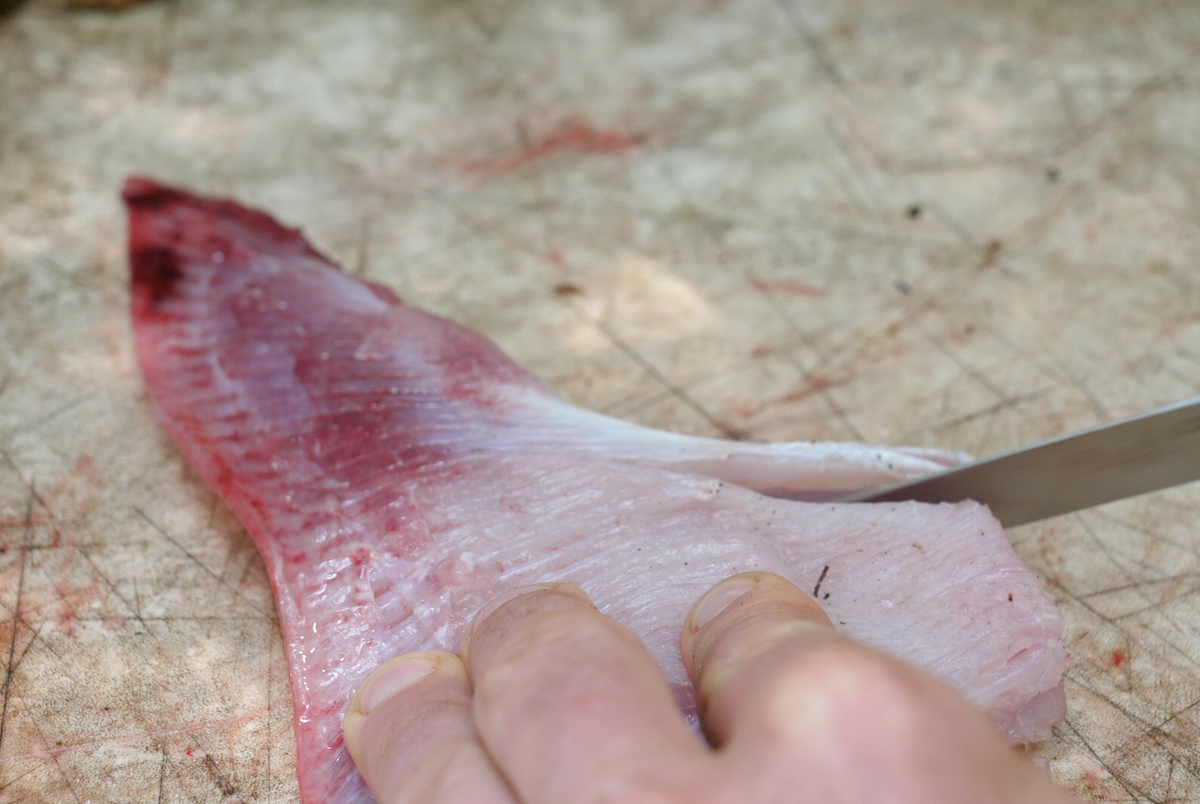 Once you rinse it off it should look like this! 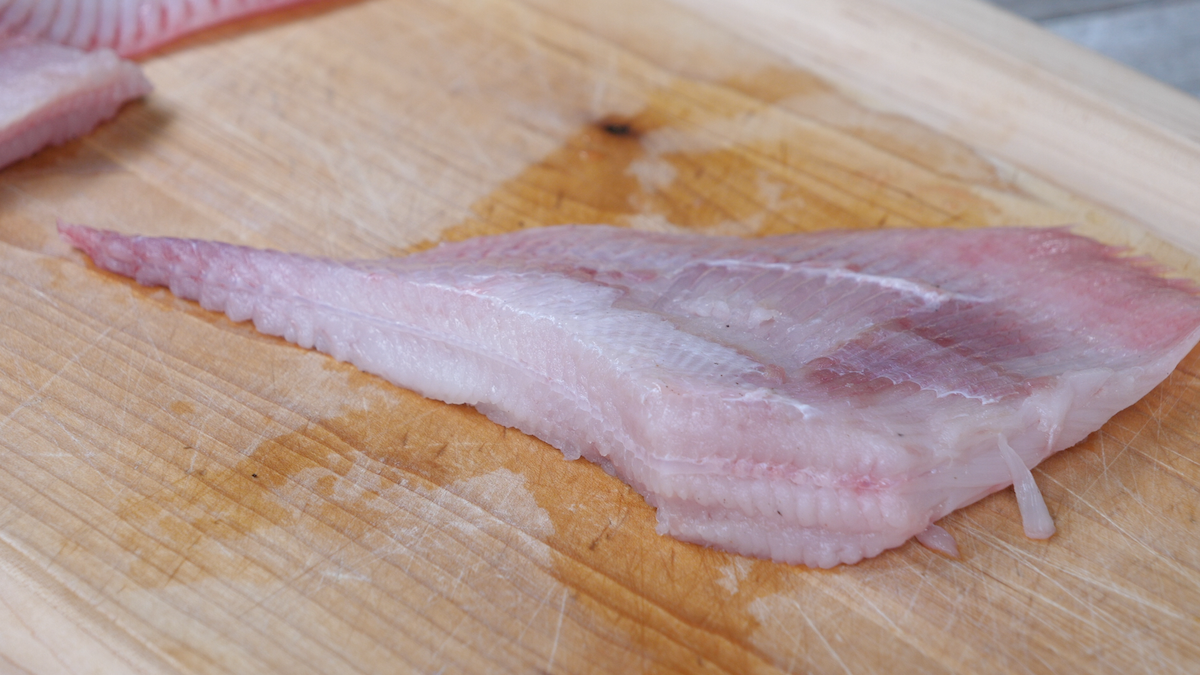 The last step is to remove the piece of cartilage that's running right through the center of each skate wing.

To do that, slowly run the edge of the knife on top of the cartilage that runs through the center of the skate wing. Gently pull back the fillet, pulling the meat away from the slice of cartilage. 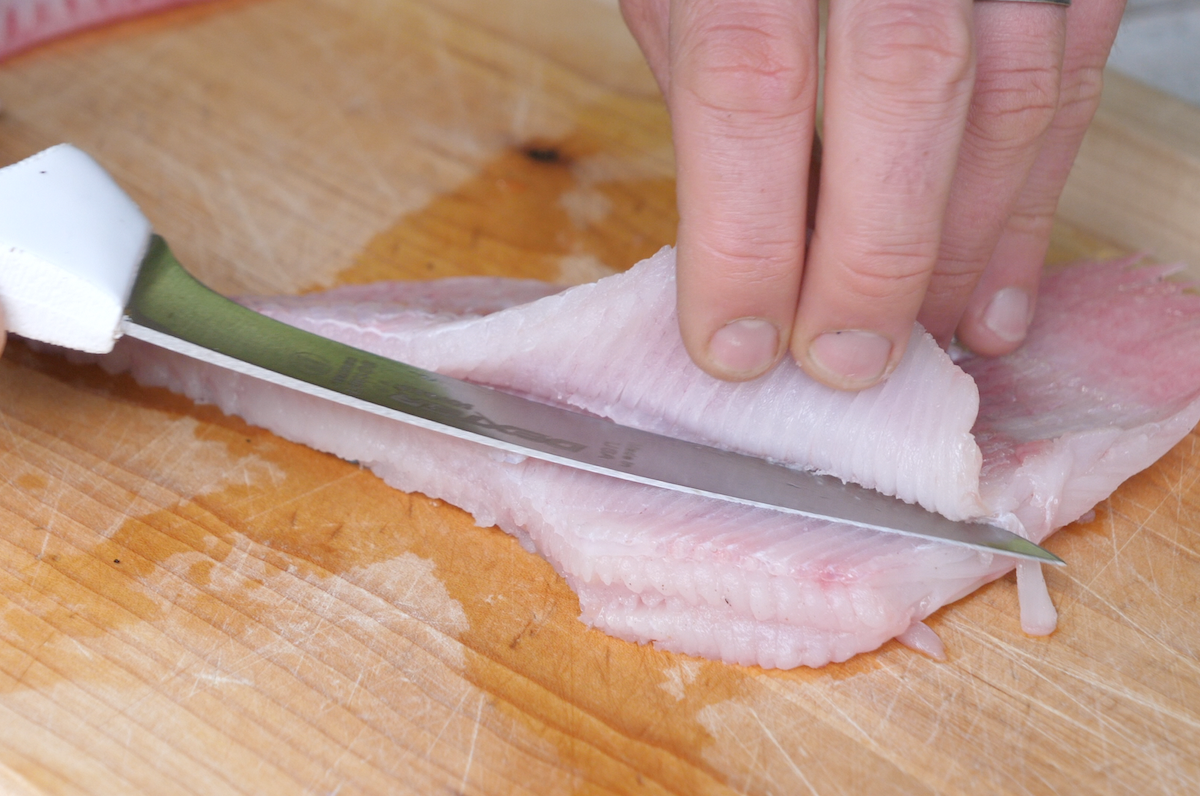 Repeat the process on the underside of the skate wing, and you'll end up with two very thin but delicious skate wing fillets. 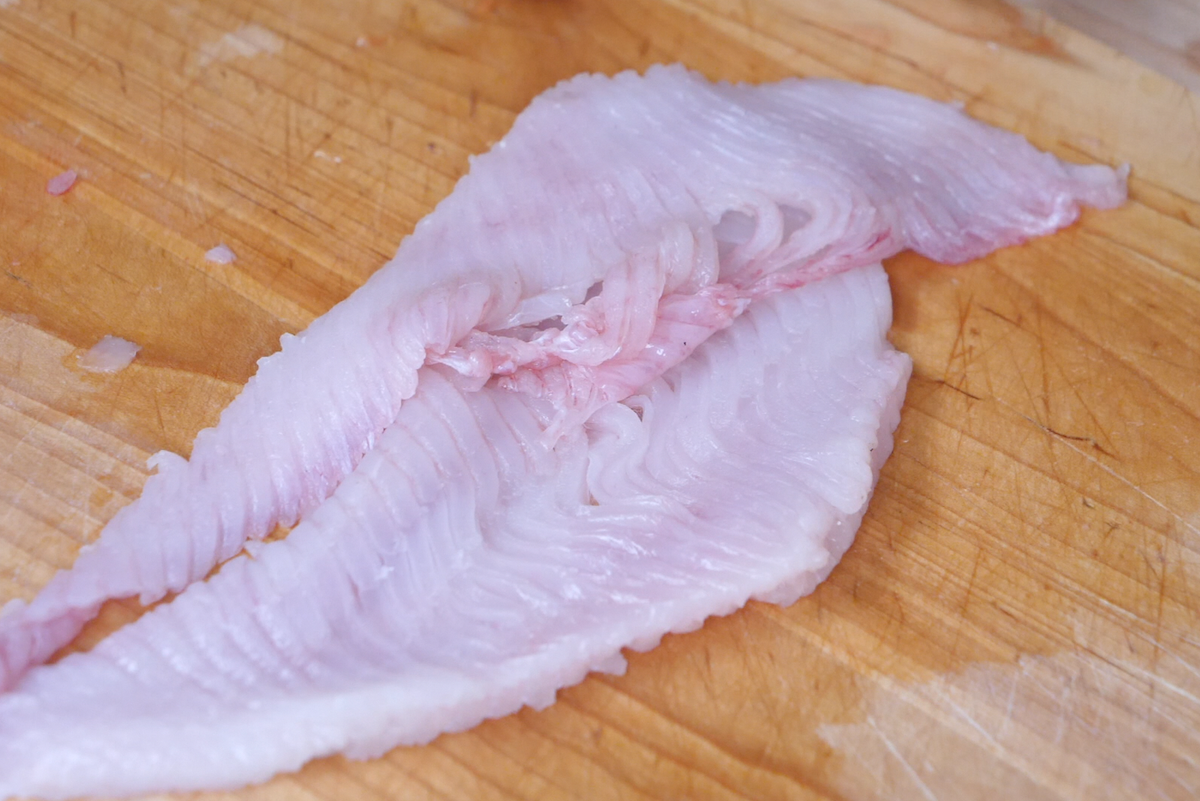 I never thought that eating skate would be so delicious!

You can click play below to watch Lauren's pan fried skate video, or scroll down for step-by-step instructions.

Hey guys! Lauren here, and in the following paragraphs I'm going to walk you through how I prepared the pan fried skate.

Since it's summertime, we had fresh heirloom tomatoes from Bay End Farm as a side dish. 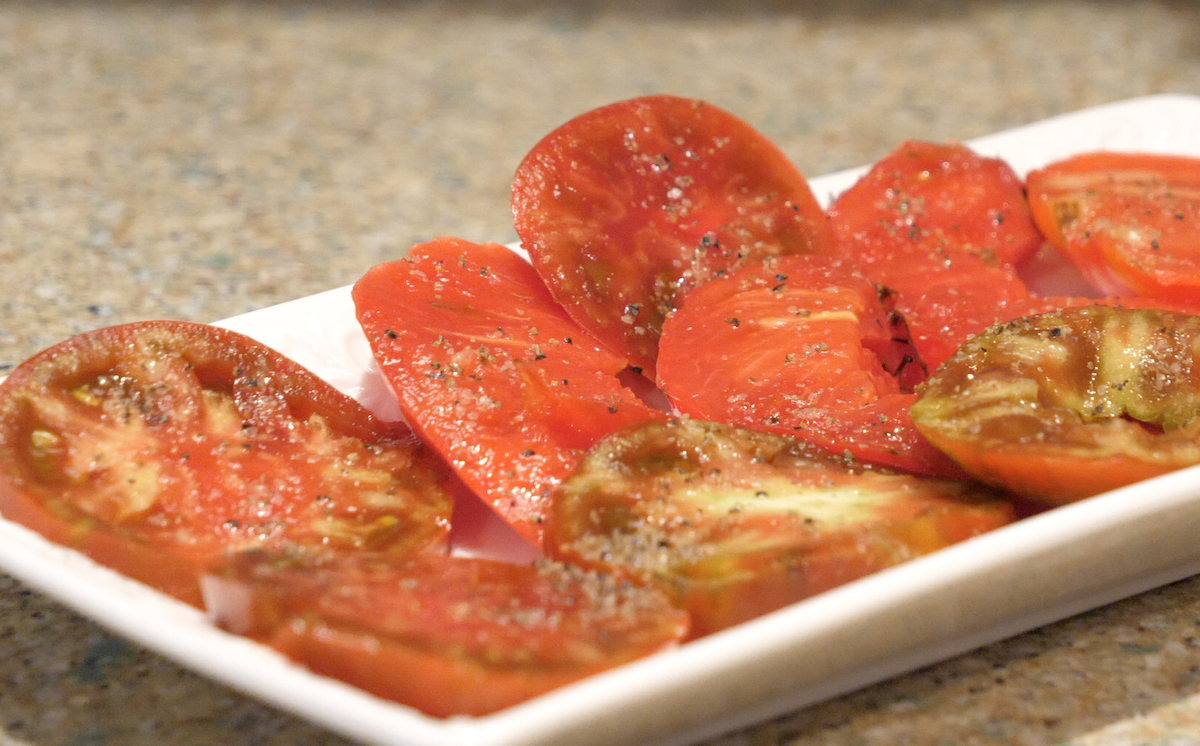 I like to salt the tomatoes before I serve them, using a basil garlic salt from Hippy Pilgrim, which goes really well with the tomatoes.

For this skate recipe, I'm just doing a simple dredge of the fillet. I skipped the flour and just dipped the skate wing into the egg. 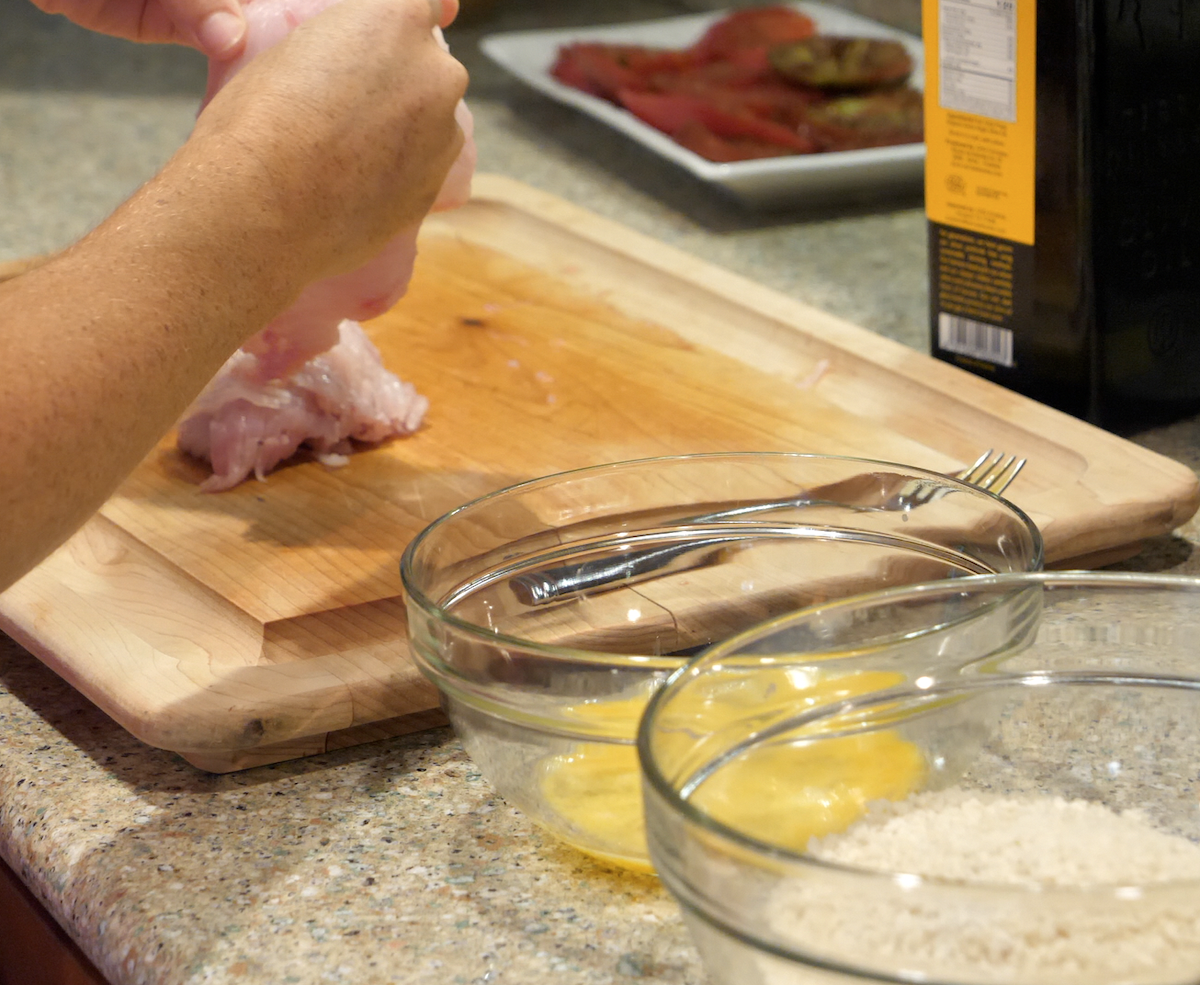 I mixed panko with citrus garlic seasoning from Trader Joe's which adds a little bit of a spice to it. However, you can put whatever you want into the panko, even if it's just salt and pepper.

For pan fraying the skate I used olive oil, but you can use vegetable oil if you prefer. Just give the skate wing fillet a really nice sear on each side. 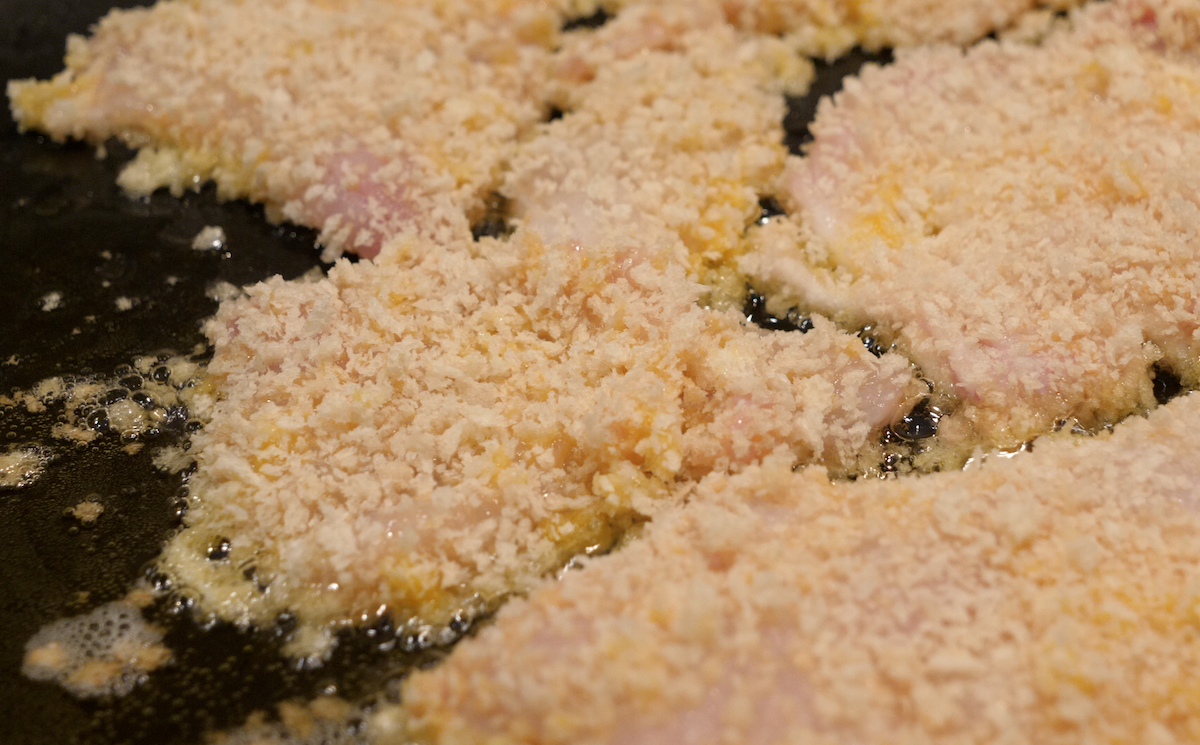 A few minutes of frying each side of the skate is all you need, and as you can see, it crisps up quite nicely!

As a finishing touch you can add a little sprinkle of salt and pepper to the top of each fillet. 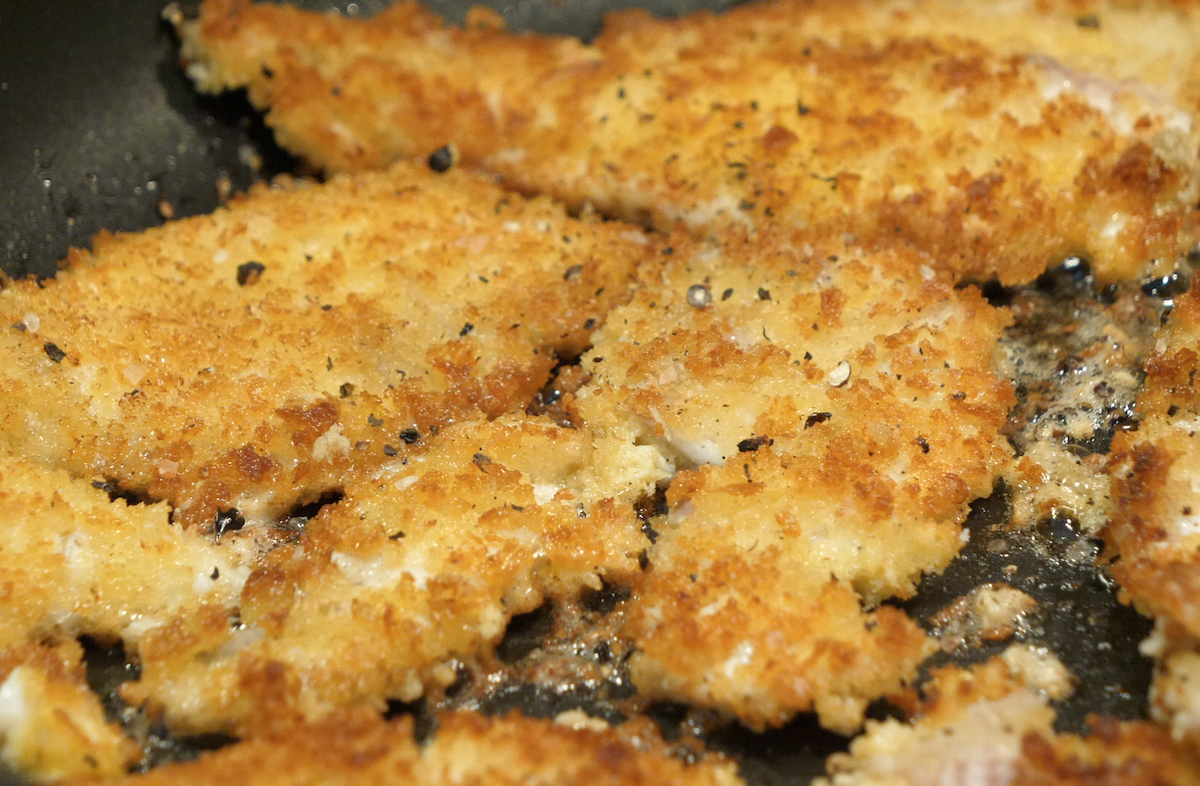 To make the sauce, I kept the leftover oil from the fish fry in the pan, and added lemon juice, capers, caper brine, salt, pepper, and butter. This makes a really simple yet delicious sauce. 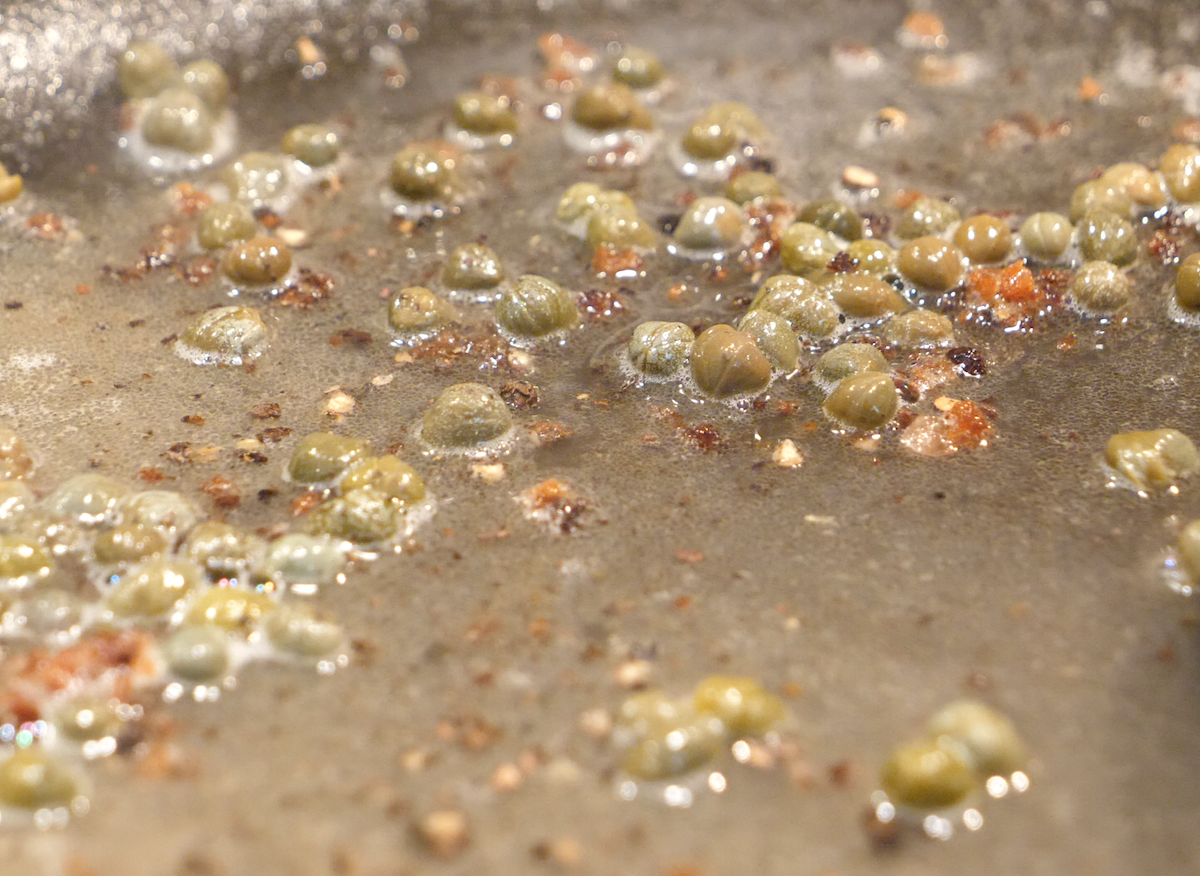 In addition to the tomatoes, for another side dish I cooked up some farro with a little butter and parmesan cheese. This is a very easy, delicious, and simple side dish.

As you can see it all came out beautifully! The flavor of the skate wing with the lemon caper sauce was delicious. 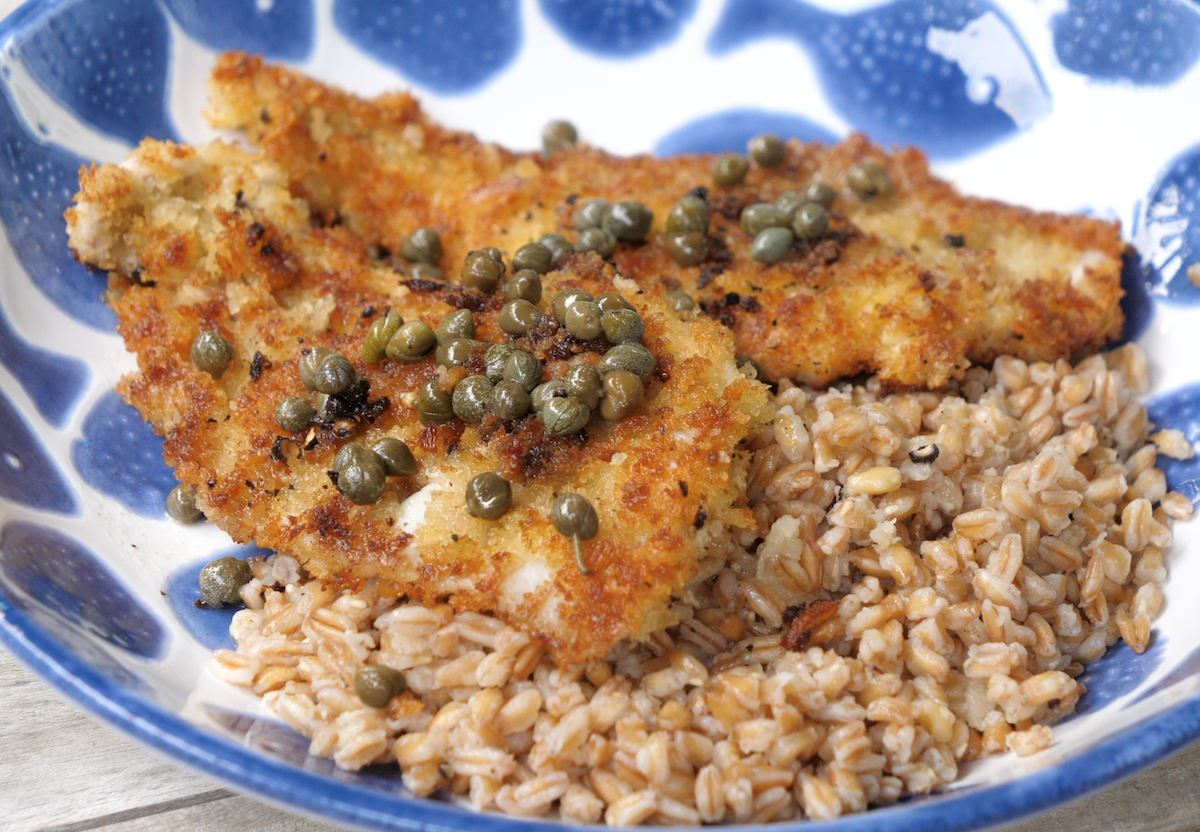 Pan fried skate wing was really easy to make, and I think you can really wow your friends and family with this fried skate recipe.

I loved it so much!

You don't get a ton of meat from each skate, but this was a fairly large skate, and it's two wings fed Lauren and I just fine. If you have more people to feed (or if you want to have more than one dinner) then I'd recommend keeping more than one skate.

In conclusion, I don't know if I'll ever exclusively go skate fishing off Cape Cod. Nevertheless, you can bet I will be keeping skate again whenever I happen to hook into one.

Not only are skate wing fillets delicious, but according to the science, the little skates that we encounter inshore have a stable population that is not being overfished. All in all, it might be smart for us to adapt and begin eating more skate as opposed to other species.

I hope you enjoyed this blog post. Have you ever caught and eaten skate before? Will you be giving skate a try after reading this? Please let me know by commenting below.