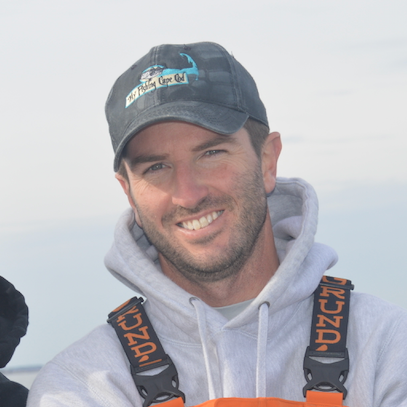 Last Thursday through Saturday we were gifted with perfectly calm conditions and warm sunny skies.

The weather was so good on Friday that I was able to comfortably fish in short sleeves. I may of even gotten a little sunburnt on my nose!

I really cherish good weather days during late October because we all know winter is coming, and fish-able days are now fewer and farther between.

One hard fighting, late-season fish worth pursuing this October and November is the tautog. 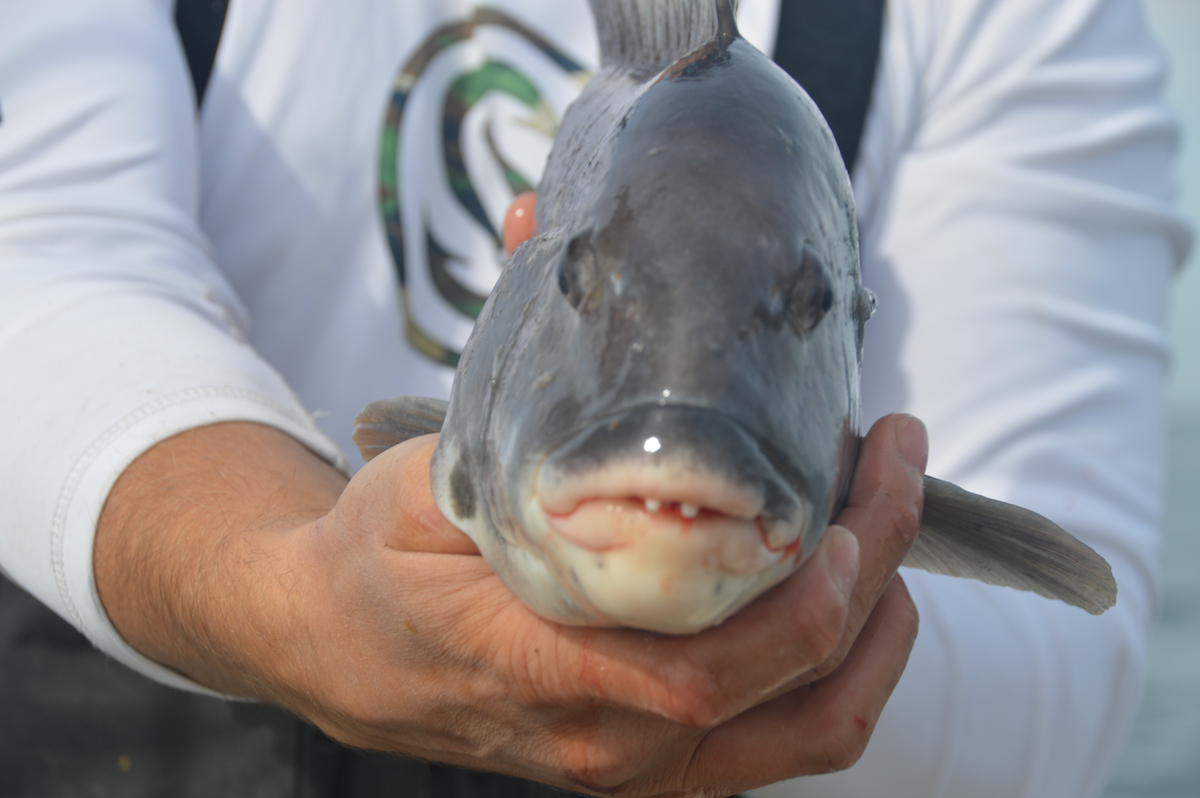 Tautog are also called blackfish and they infiltrate inshore rock piles during the fall. They are a blast to catch!

This past Friday I accompanied my friend Jason and my dad Jake on another tautog fishing adventure. 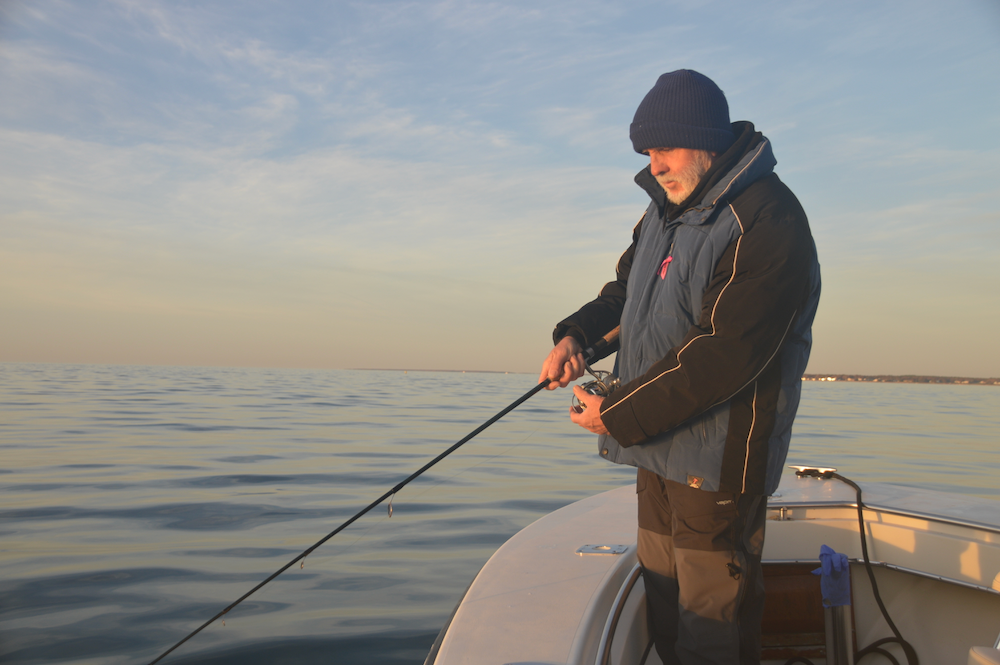 We encountered lots of tautog, and enjoyed a beautiful day on the water.

Today I'd like to invite you to read all about it, and to also watch some really cool underwater video footage below.

On Friday morning the seas were as smooth as glass, and there was not a hint of wind.

The sunrise was remarkable, with orange and red colors scattered across the silky smooth surface of the water. 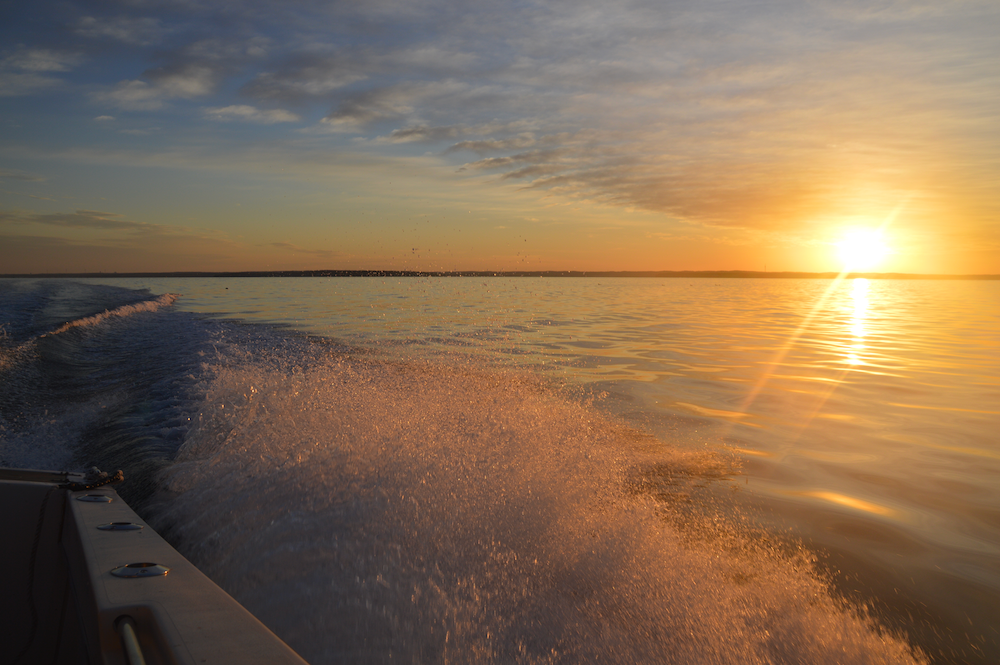 As we headed south through this general area I could not help but relish in the picture-perfect conditions.

Who knows the next time we will get a perfect weather window like the one we enjoyed on Friday! 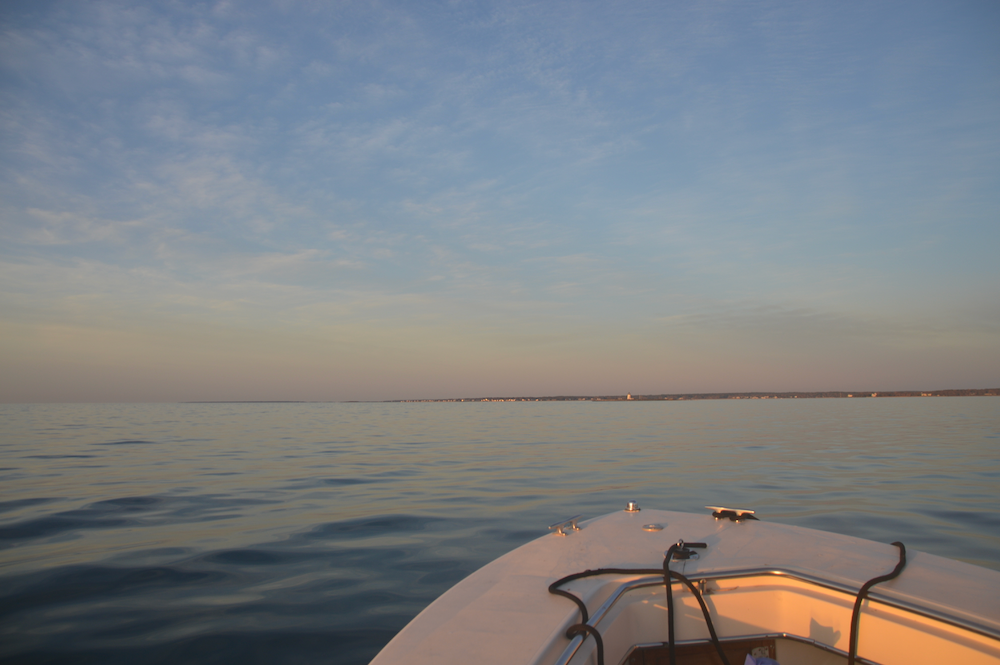 For this trip I was with my dad and my friend Jay. 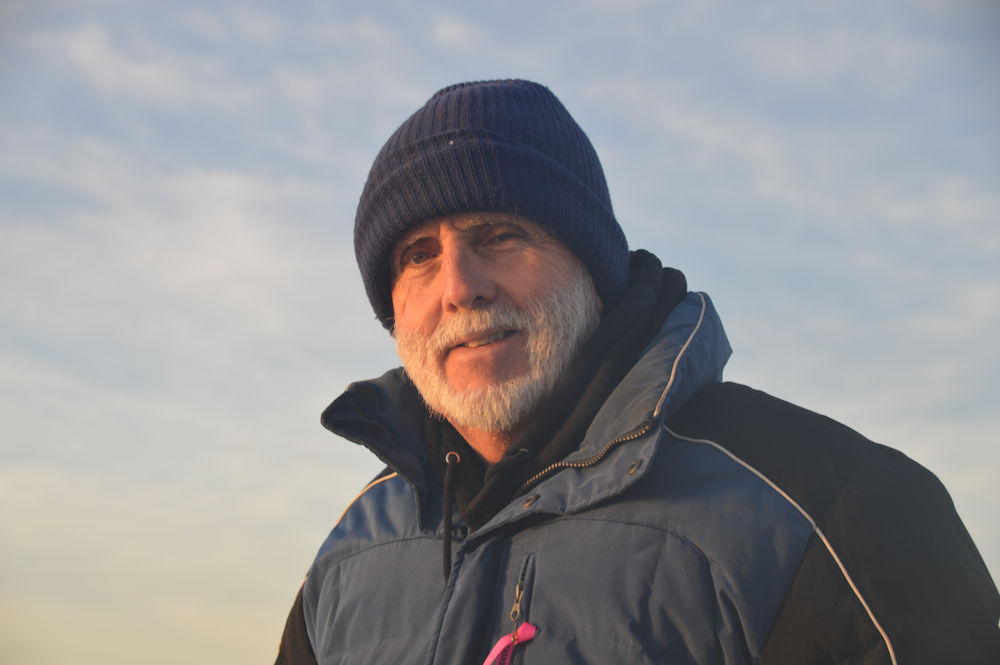 We have all been fishing together for around 20 years. 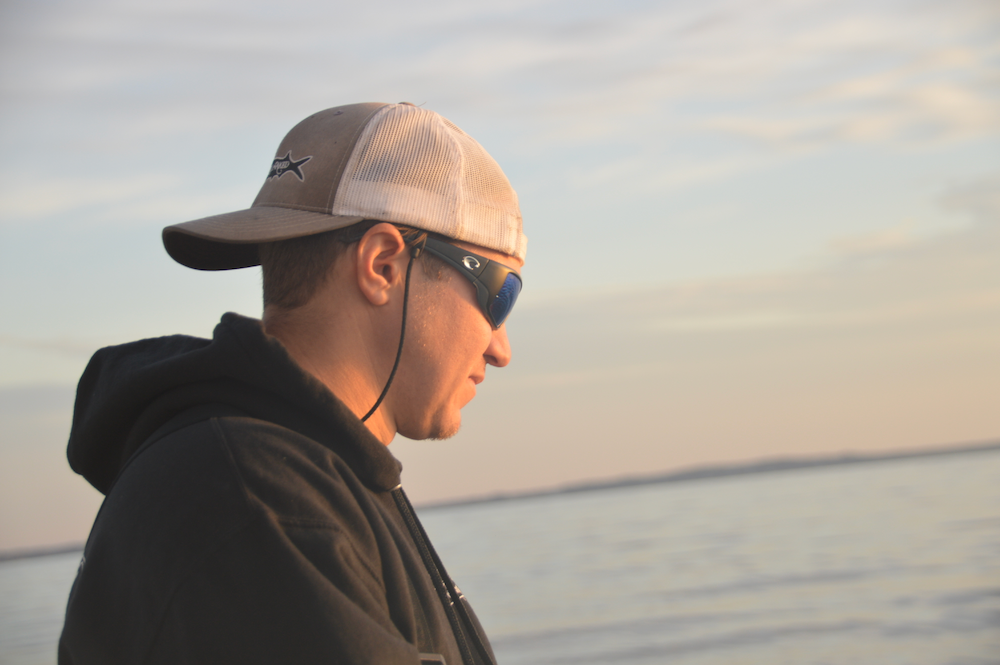 When Jay and I were 12 years old, my dad would pack all three of us into a small 12 foot boat powered by a 6hp Johnson.

We have some epic fishing memories together to say the least!

As we cruised out to the tautog grounds I got busy cutting up the green crabs which we would use for bait. 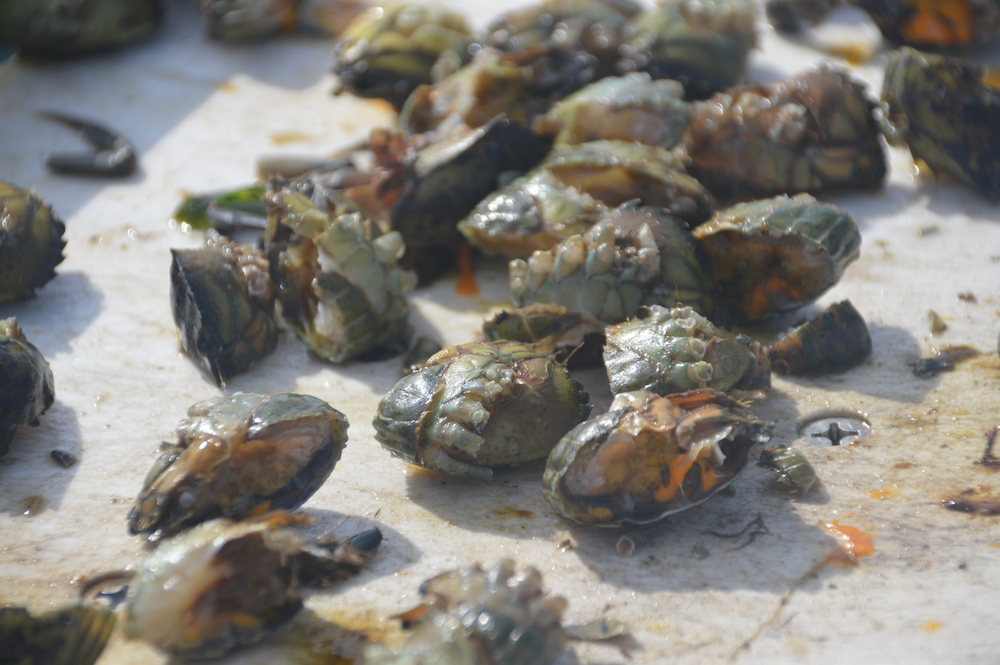 I removed the legs and cut the crabs in half, saving the halved crabs for hook bait and putting the legs into a chum pot. 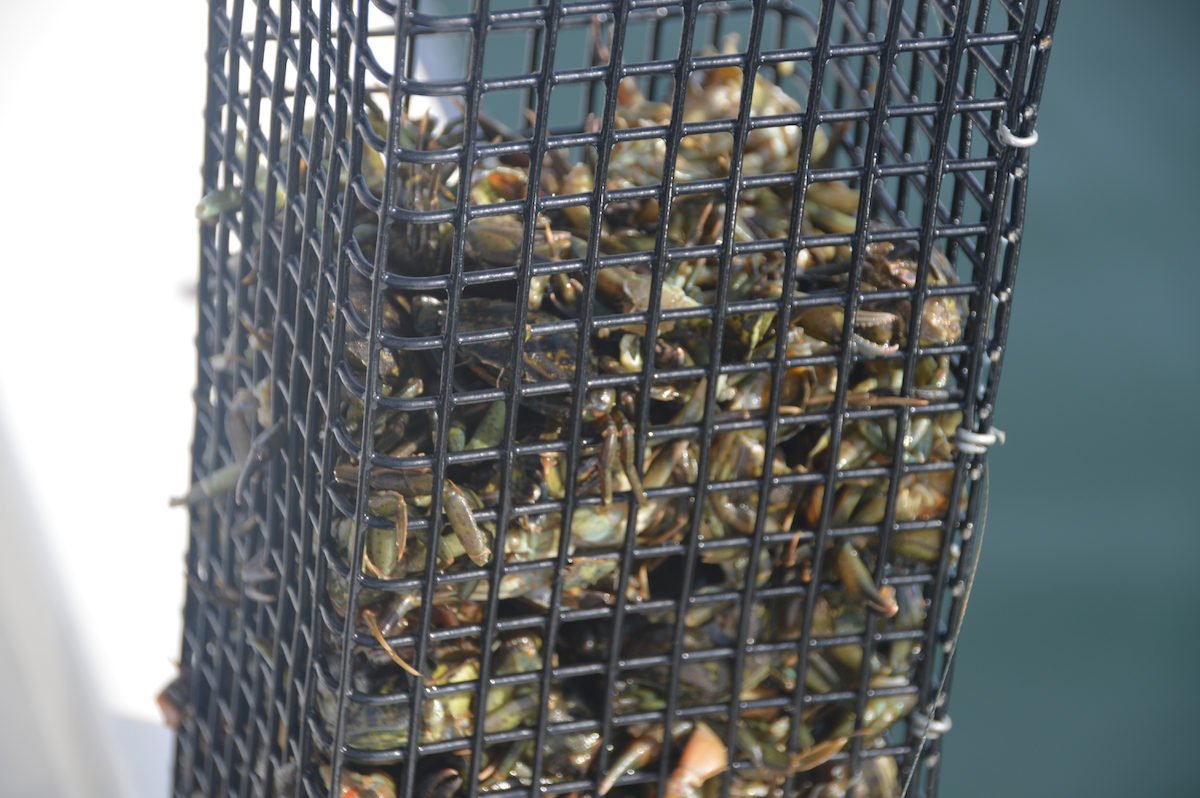 I connected the chum pot to a line and dropped it straight to the bottom.

Over time the pieces of crab meat would drift away in the current, which would hopefully draw the tog to the boat, and keep them there.

Upon reaching our first rockpile of the morning I broke out the Togzilla jigs. 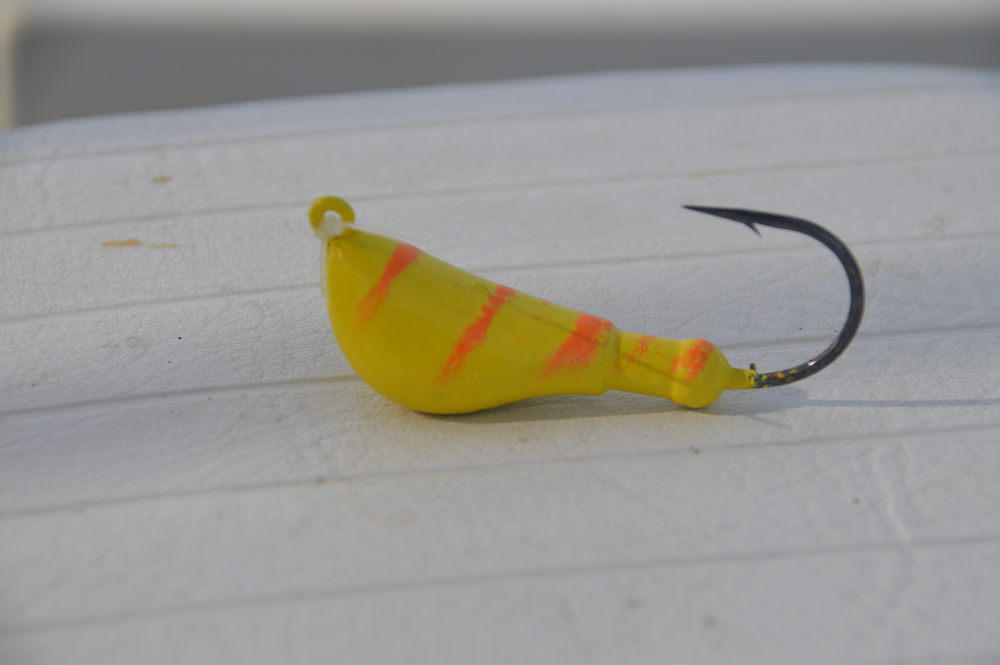 Simply thread the hook of the jig through one of the crab's leg sockets and remove the shell.

Then drop the jig straight to the bottom and allow the jig to lay on the bottom amongst the rocks and boulders. 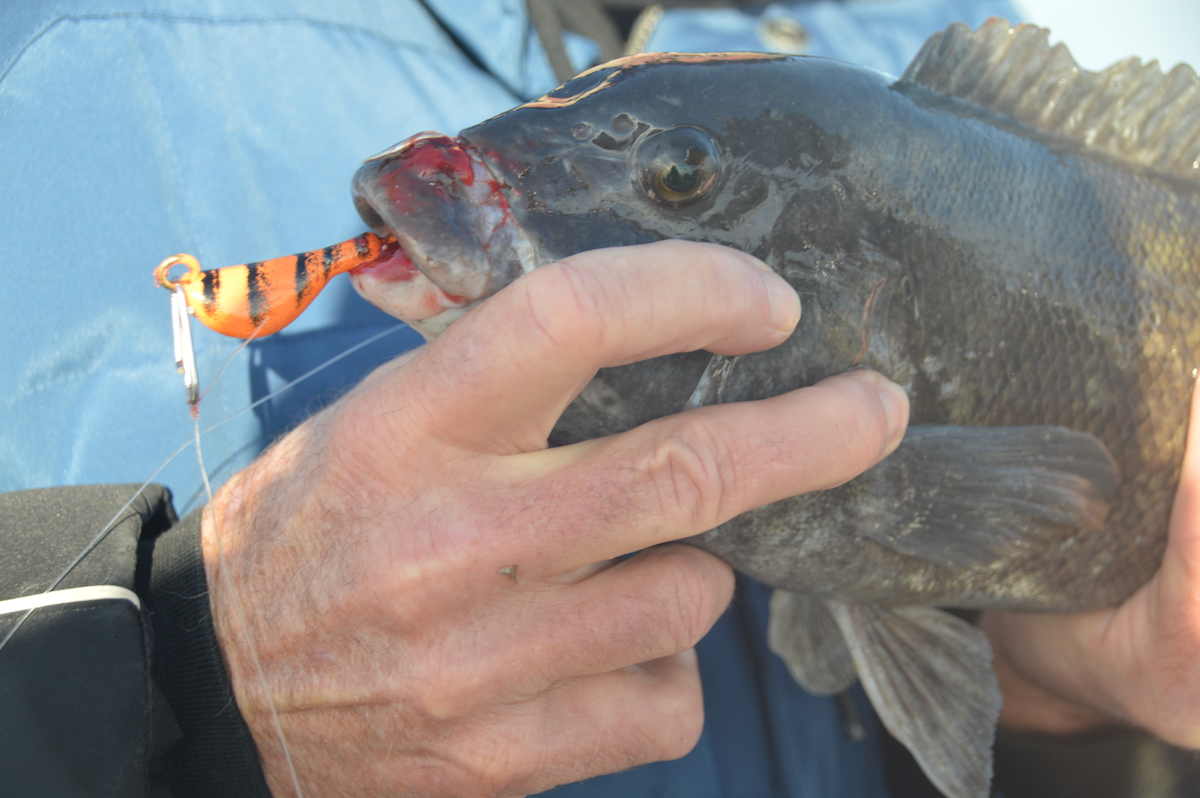 At first we didn't get any bites.

The tog were concentrated in specific areas, so one patch of bottom would be devoid of life, while another would be filled with tog.

However, after making some minute adjustments, and anchoring closer to structure, we started catching tautog. 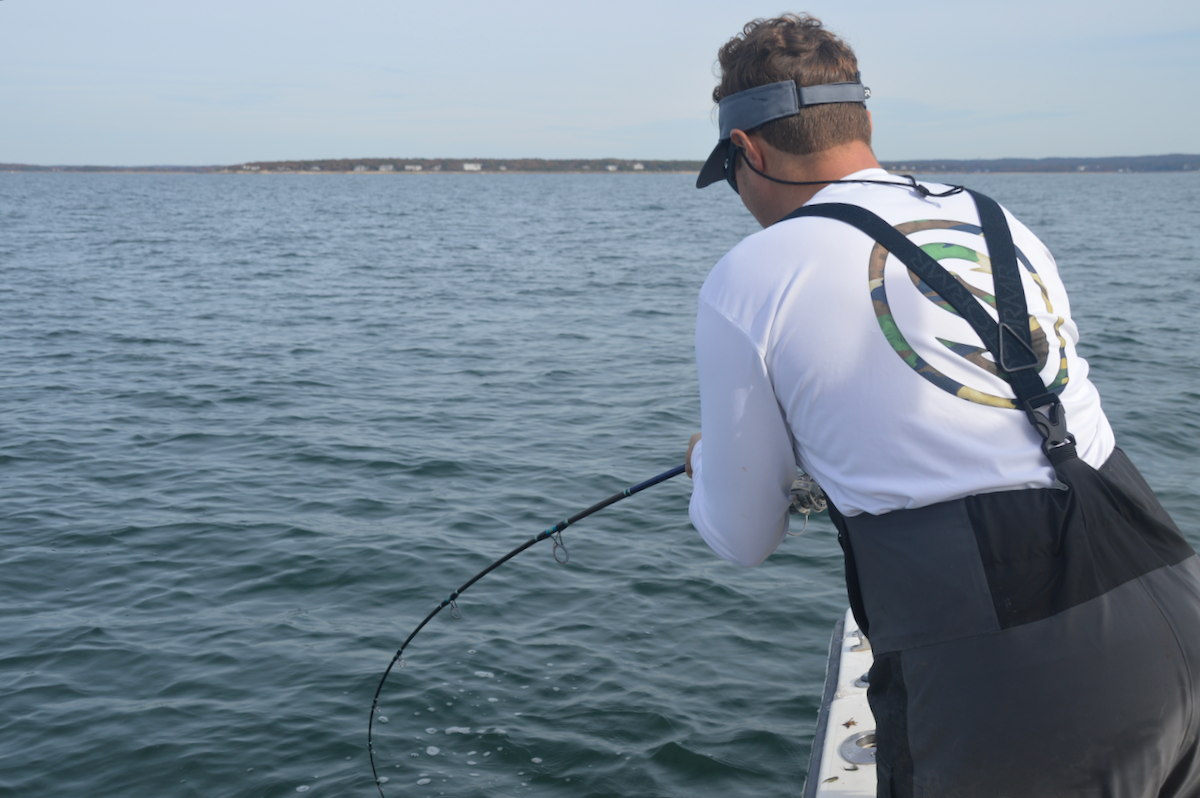 Even small tautog put up a great fight!

The first run of fish were all shorts. We could feel the small tog nibbling away at our baits.

These fish were nearly impossible to hook using the Togzilla jigs, but we did catch a few using a hi-lo rig. 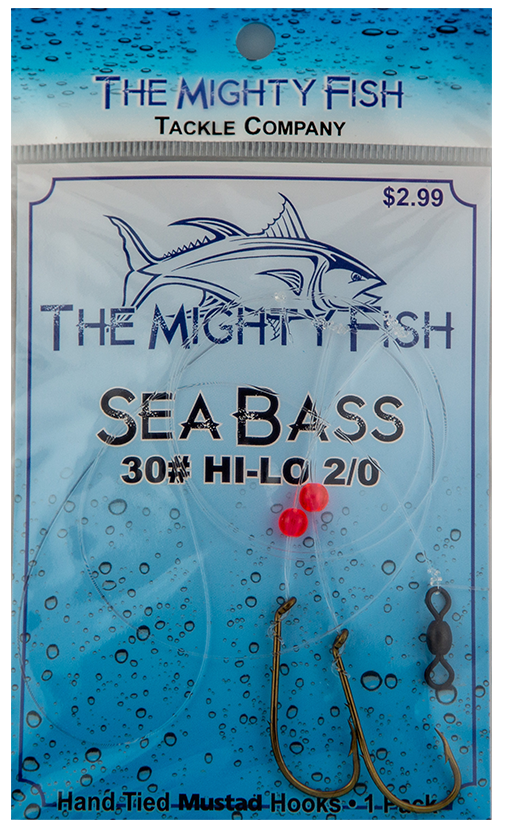 During this trip I was constantly experimenting with underwater cameras, in an effort to capture these fish on video.

As you will see in the below photo, I attached a GoPro camera to the top of the chum pot. 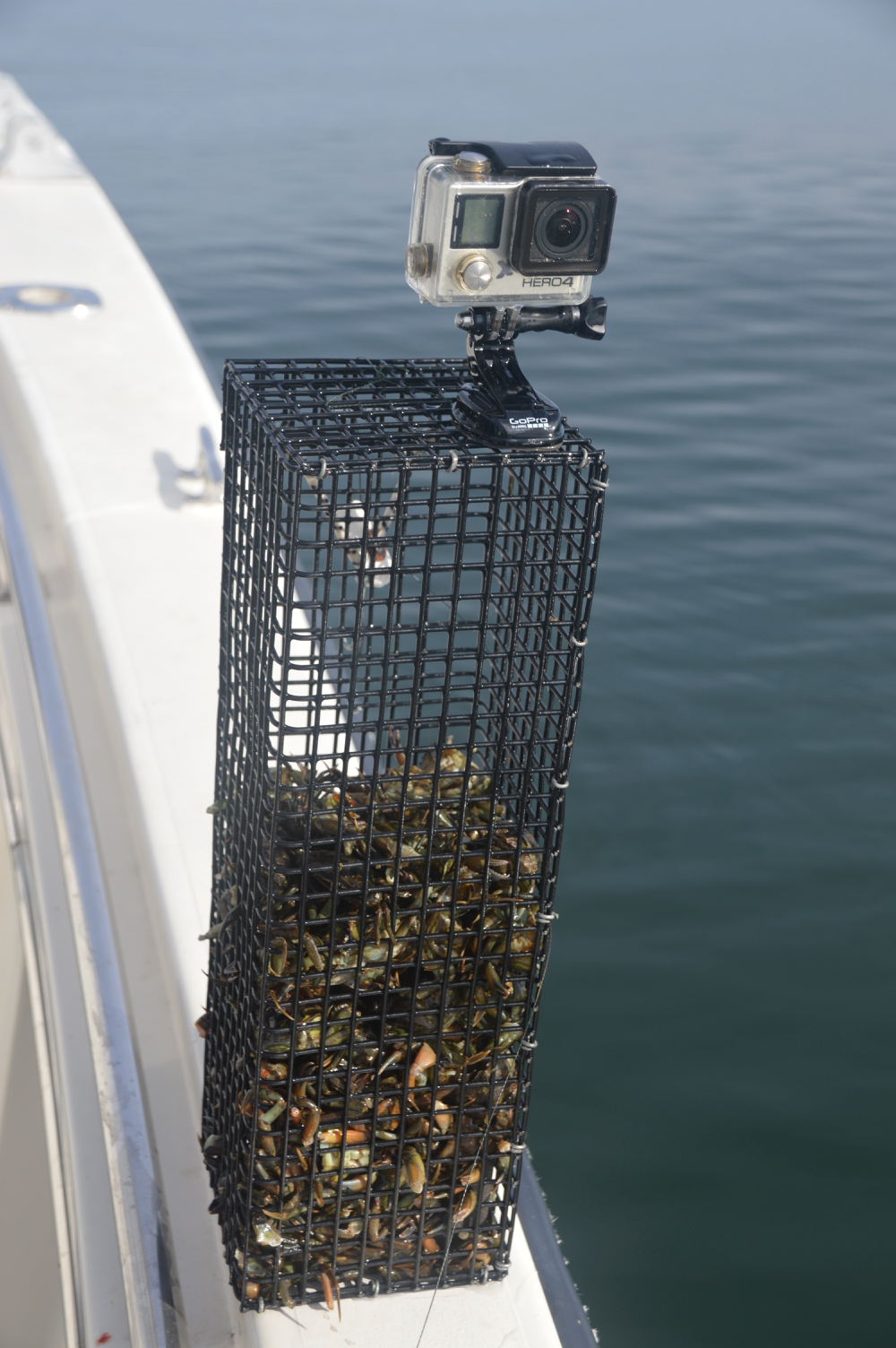 I am excited to say that I captured some pretty cool underwater footage which I would like to share with you right now!

For the first time ever, I was able to observe some of my favorite tautog fishing hot spots from beneath the waves. 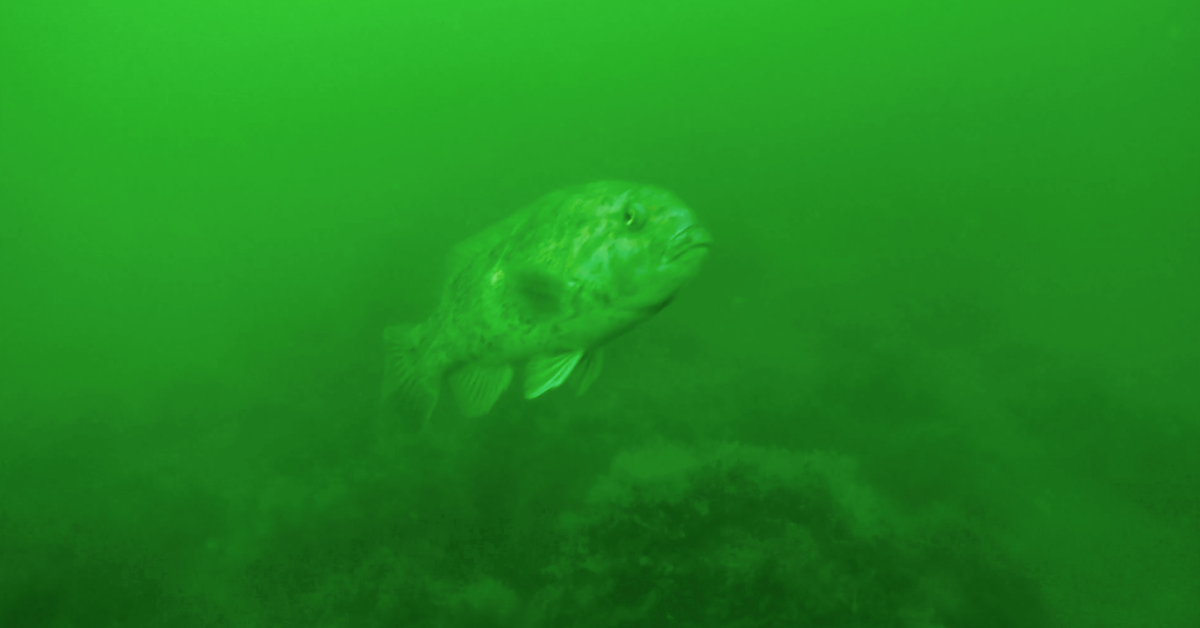 I personally feel as if I understand our local tautog fishery so much better now, after seeing it underwater.

I think underwater videos like the one above can teach us anglers a lot.

For example, because of this new footage, I now know exactly what is going on when I feel repetitive small bites from "micro tog."

What did you learn from the video?

5 Keepers Plus Many Shorts

As you can clearly see in the underwater video above, there were a lot of small tautog around on Friday morning.

However, we did experience a run of bigger tog between 11am-1pm. 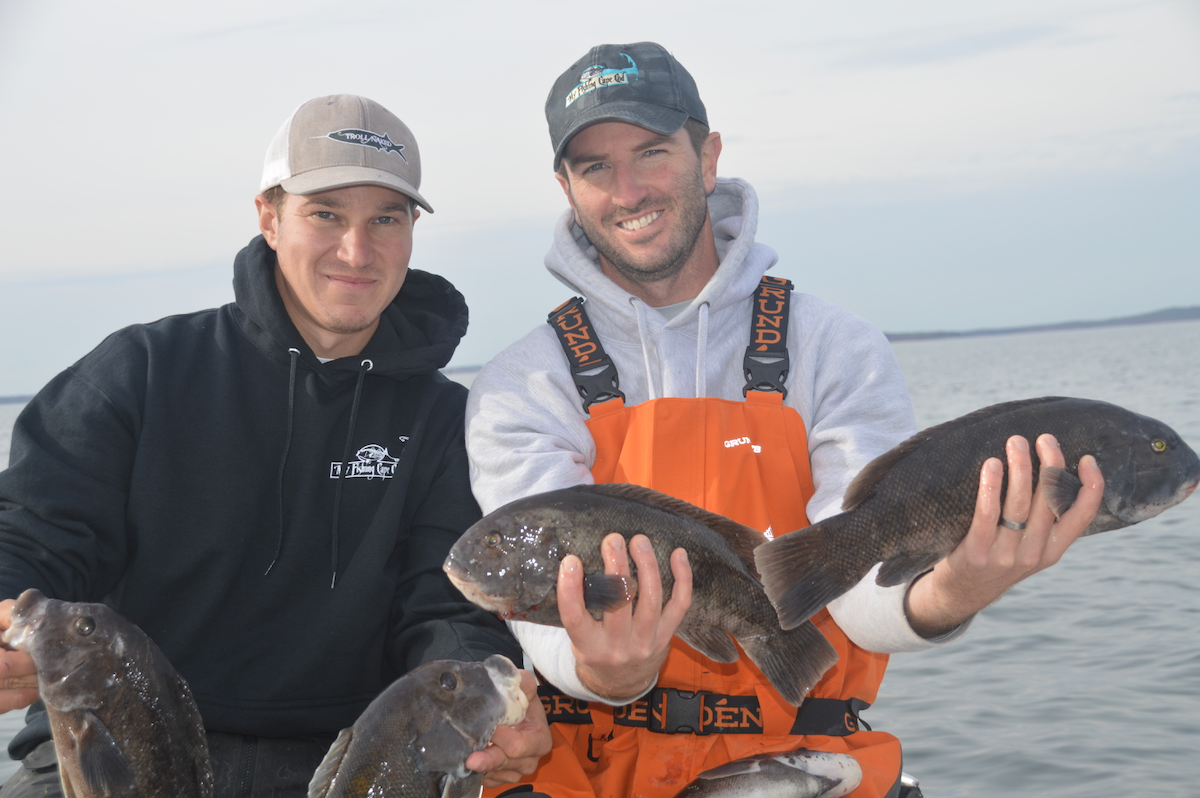 We ended up catching 5 keepers with the largest around 20 inches. We also caught a bunch that were just below the 16 inch keeper size. 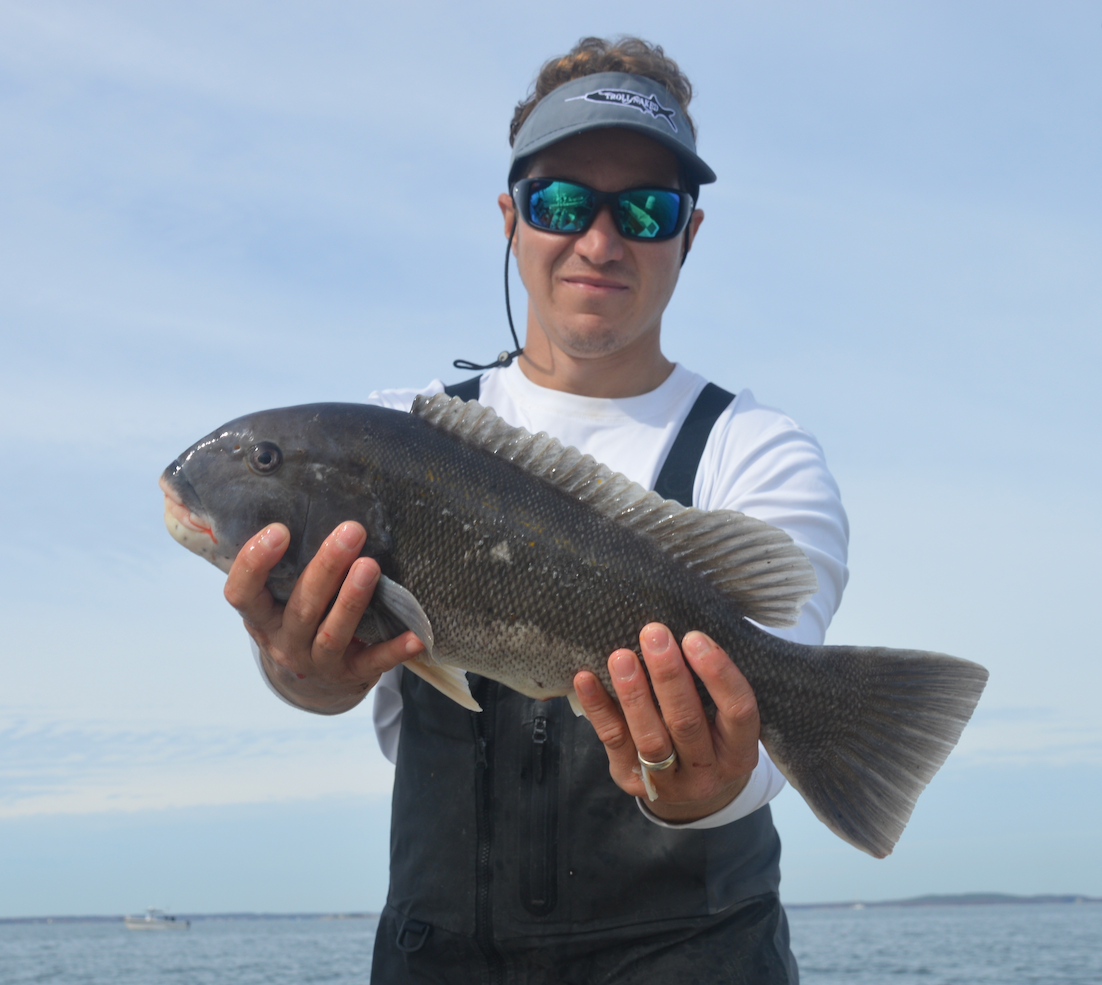 We would routinely get harassed by schools of "micro tog" that were too small to hook, and we also caught and released a half dozen oyster toadfish. 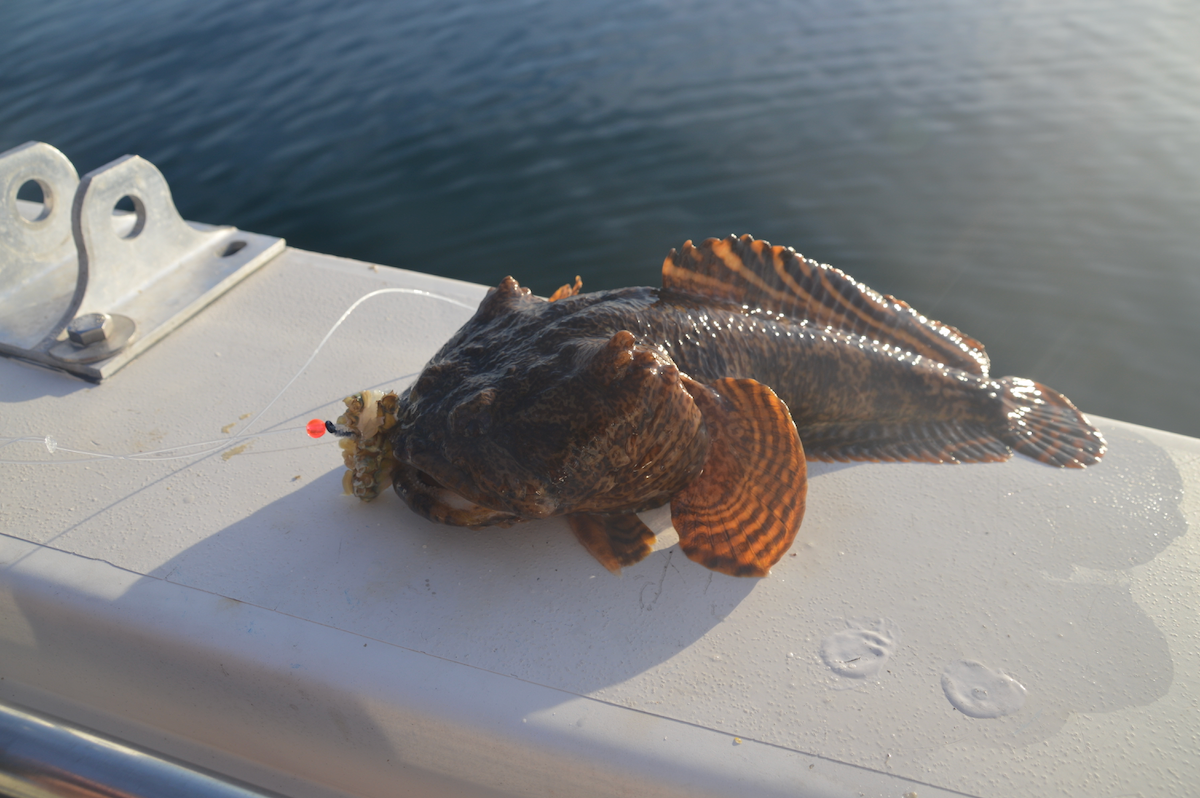 I will have to remember to keep one next time!

As previously mentioned, we used hi-lo rigs and Togzilla jigs to present the green crabs. 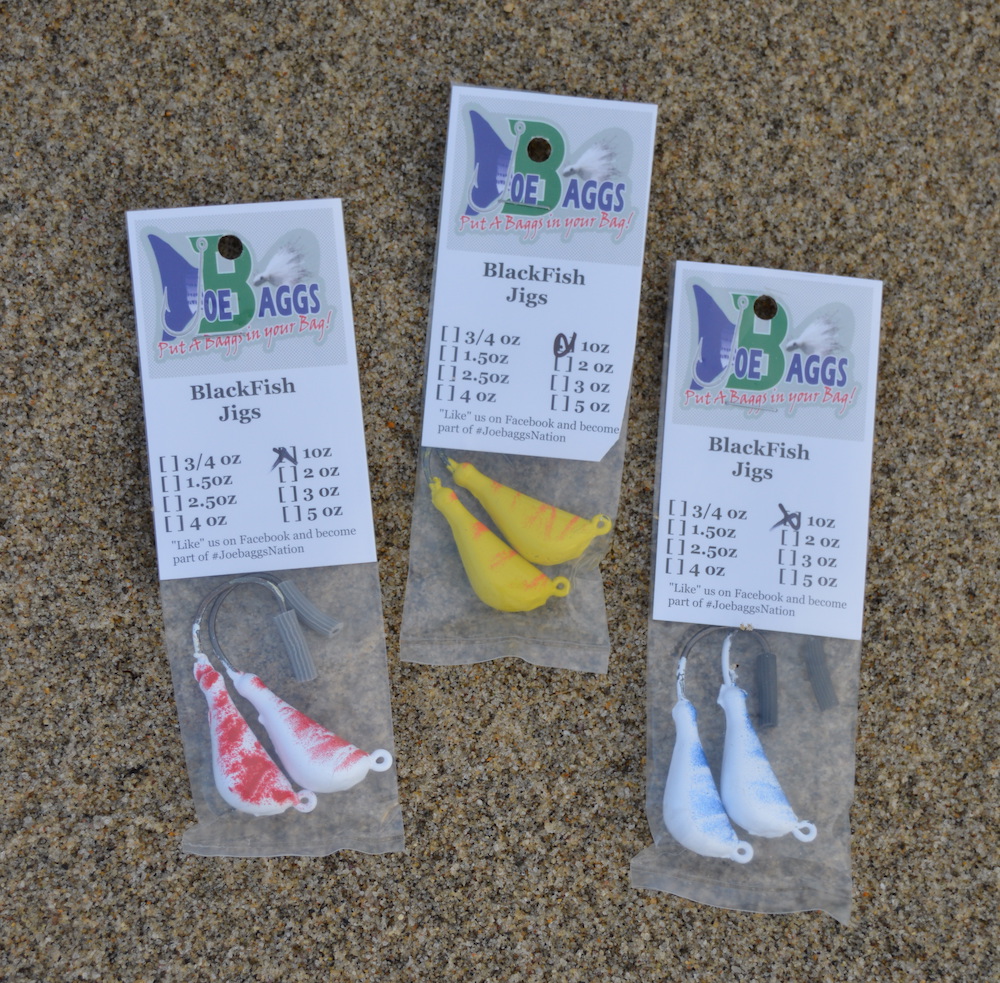 When preparing the green crabs I like to use bait scissors to snip off all the legs. I then cut the crab in half.

To see the entire process in action, please watch the MFCC Tautog Tutorial.

Any medium action 7ft rod that has some backbone will do. Ugly Stiks work great for tog fishing, but during this trip I was using my Shimano Teramar TMS-X70MH which I also regularly use for stripers and albies.

The Shimano Talavera is another good rod at a fair price that would probably work very well.

Some experienced captains will use 50 pound braid to help them pull big tog up out of the rocks, but during this trip I was using 20 pound braid with a 30 pound fluorocarbon leader on a Van Staal VR50 reel. 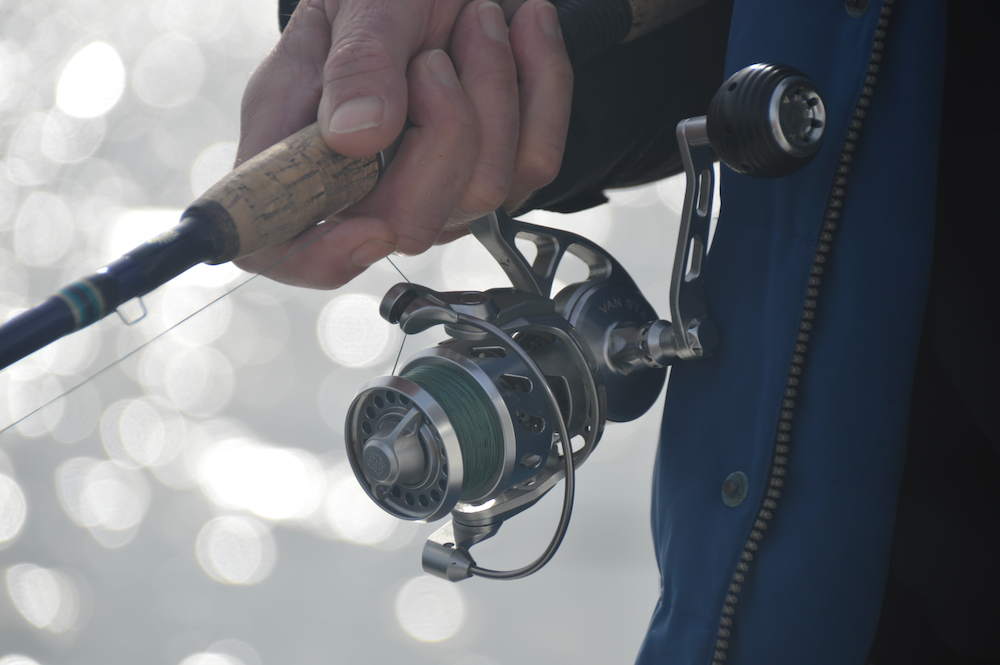 My setup is probably a little lighter than normal for tog fishing, but I very much enjoy how it feels and it fishes well.

The VR125 would also probably be a lot of fun to use for tog.

A more budget-friendly option would be a Penn Battle II 5000 or really any size 5000 reel for that matter.

I had a great time on Friday fishing with my dad and my buddy Jay. The weather and sea conditions could not of been any better! 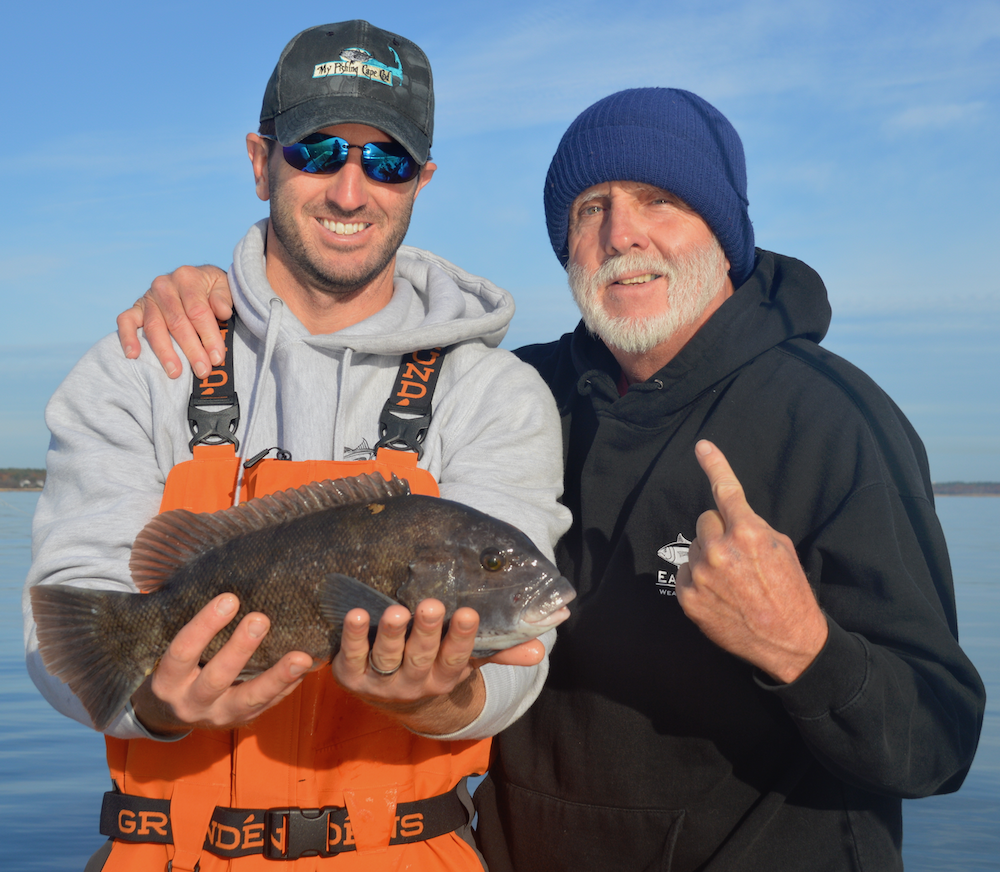 If you would like to learn more about tautog fishing, then you can click the toggle below to open up more posts and videos.

Behind The Scenes Of Episode #5 | Tautog Fishing With My Wife

A Double Header of Tautog and Stripers from Shore

Of course please feel free to leave a comment below, or make a post in the forum if you have any questions.

Myself and the members here on MFCC are always happy to help.

Best of luck if you make it out fishing this week. Hopefully the tautog fishing will remain strong right through November.

Please let me know what you think by leaving a comment below.