The My Fishing Cape Cod forum is bustling with activity so far this season! With each passing day we see around 100 new posts go live.

This year the forum has been a great mix of experienced anglers, as well as novice anglers. In addition I've seen a lot more women posting.

Today I'd like to highlight the top 5 most helpful members so far this June. Over the past few weeks, these members' posts inside the forum have received the most "Likes", as voted by fellow members.

Jon joined My Fishing Cape Cod in March of 2019. Since that time he's really taken to kayak fishing and can be found paddling around the waters of Buzzard's Bay and beyond.

Over the past few weeks Jon has contributed 21 posts to the forum. These posts have so far received 150 Likes. Thank you Jon for being active on the site and good luck out there in the kayak! 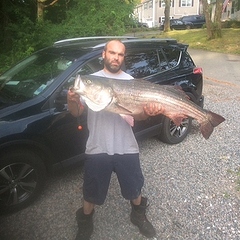 Henry joined My Fishing Cape Cod in April of 2018 and has been fishing for many years. He is a husband and father of two kids, and works as a heavy diesel mechanic.

Over the past few weeks Henry has contributed 62 posts to the forum. These posts have so far received 167 Likes. Thank you Henry and keep up the good work! Tim joined My Fishing Cape Cod in August of 2016. He is based out of West Dennis in the summer and Melrose the rest of the year. Tim is an avid surfcaster.

Over the past few weeks Tim has contributed 98 posts to the forum. These posts have so far received 195 Likes. Thanks Tim and good luck if you hit the beach this week! Over the past few weeks Anthony has contributed 36 posts to the forum. These posts have so far received 256 Likes. Thank you Anthony! Calvin recently joined My Fishing Cape Cod in April of 2020, and is also in the US Navy. Calvin is a surfcaster who enjoys wet suiting out to rocks and boulders. He also enjoys fishing the canal.

Over the past few weeks Calvin has contributed 169 posts to the forum. These posts have so far received 373 Likes. Thank you Calvin for being so responsive in the forum, and I'm looking forward to reading more of your posts as the season progresses!

It makes me very happy to see so many of our members taking time out of their day to contribute thoughtful replies and helpful posts inside the forum.

Whether you are providing an in-depth answer to someone's question, or just posting a quick fishing update, I really appreciate your efforts.

Have you received benefit or help from members inside our forum? Please let me know by commenting below!