Recently my friends and I decided to pick up some trash at the Cape Cod Canal, and we enjoyed a beautiful morning with many amazing sights and scenes.

Within 2 hours we scooped up several trash bags full of junk between the Sagamore Bridge and the Bournedale Herring run.

I know many MFCC followers also pick up trash while they are out fishing. Lets keep up the good work so we can inspire others to do the same! 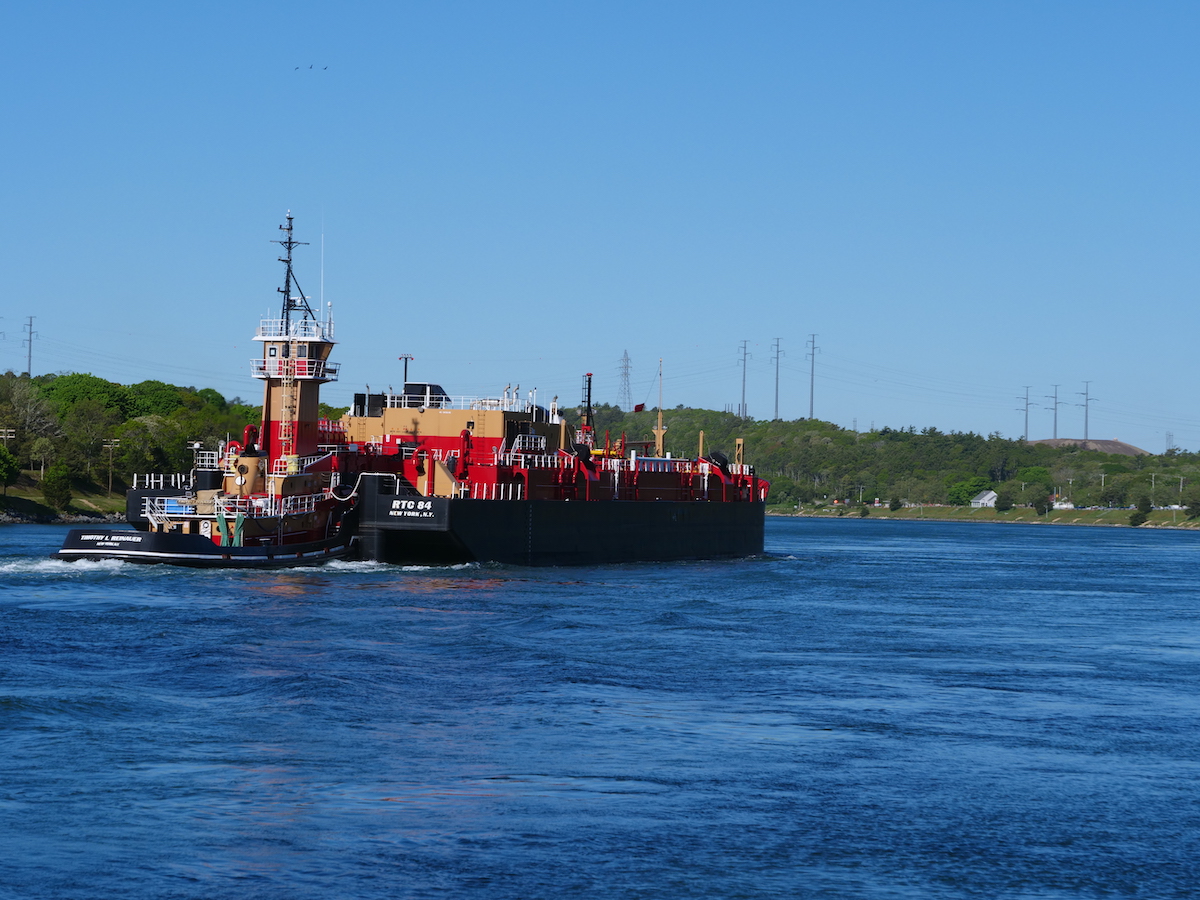 A variety of ships and boats pass through the canal each day. They range in size from small pleasure craft, to massive barges, and even cruise ships.

You never know what you may see when you go for a walk along the canal. Tugs and barges (like the one above) are common sights.

You may also see wildlife. It is not unusual at all to see dolphins, seals, a variety of different birds and sometimes even whales. 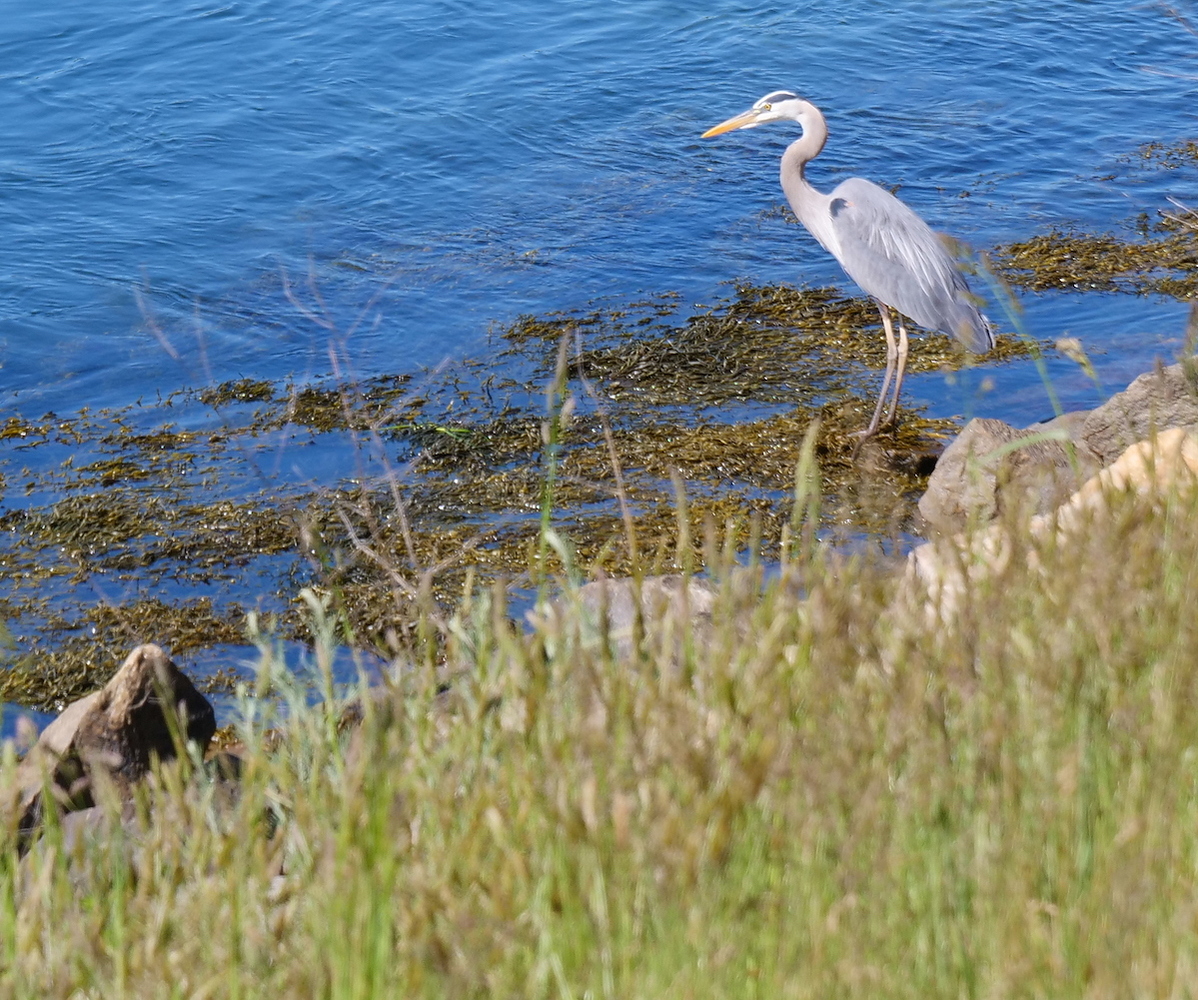 While cleaning up trash the other day we spotted what I believe is a great blue heron, as the bird patiently hunted among the rocks and weeds.

Back when we did the mini-clean up on June 1st, we spotted small schools of river herring taking cover among the rocks and weeds.

These herring were doing their best to hide from schoolies, and a couple 30 inch stripers, that were cruising just off the shore. 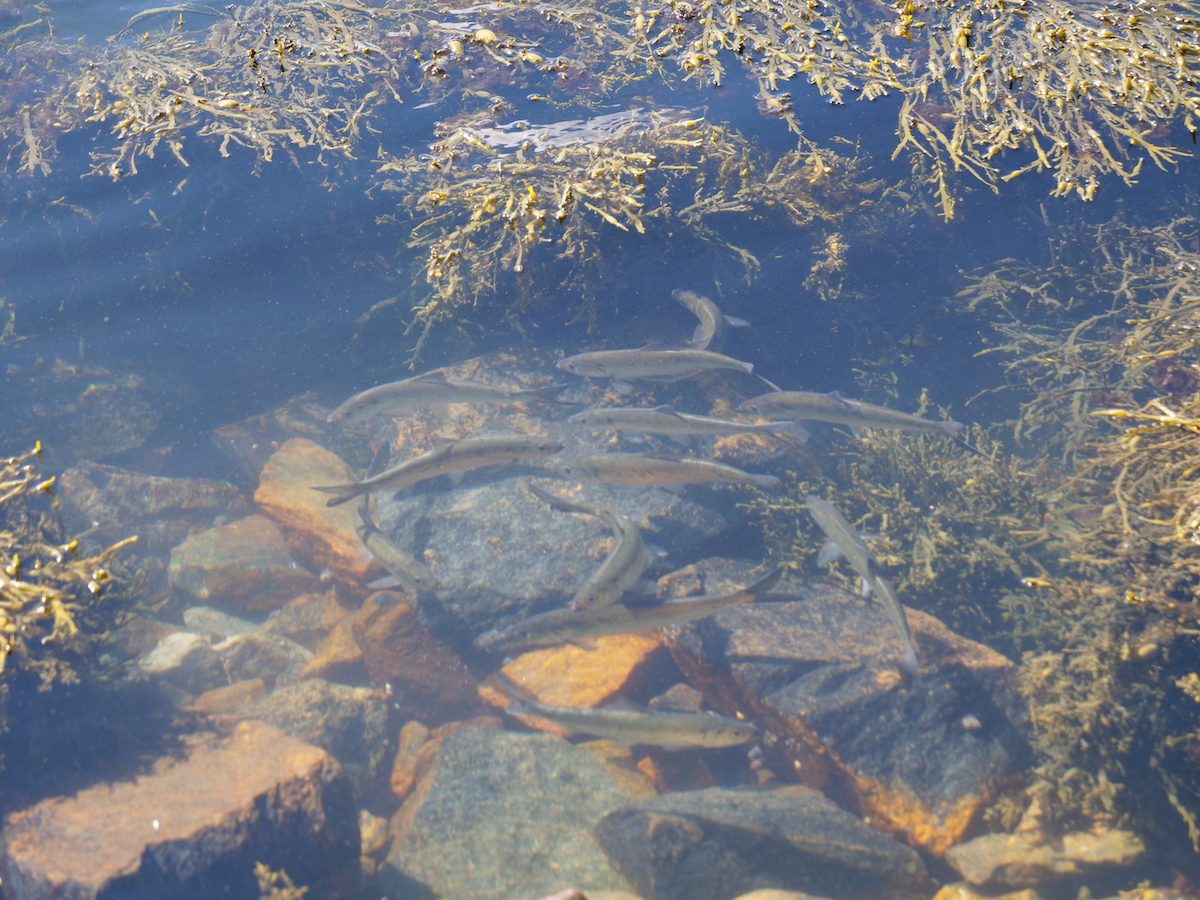 River herring begin arriving in the canal during March. They swim up the Bournedale Herring Run on their way to their spawning grounds.

These days you can find plastic in even the most pristine of places. For example, this past winter I would routinely find plastic trash while fishing the beaches of Costa Rica.

The canal is a beautiful place, but with so many people utilizing the resource, an accumulation of plastic and other junk is at this time rather inevitable. 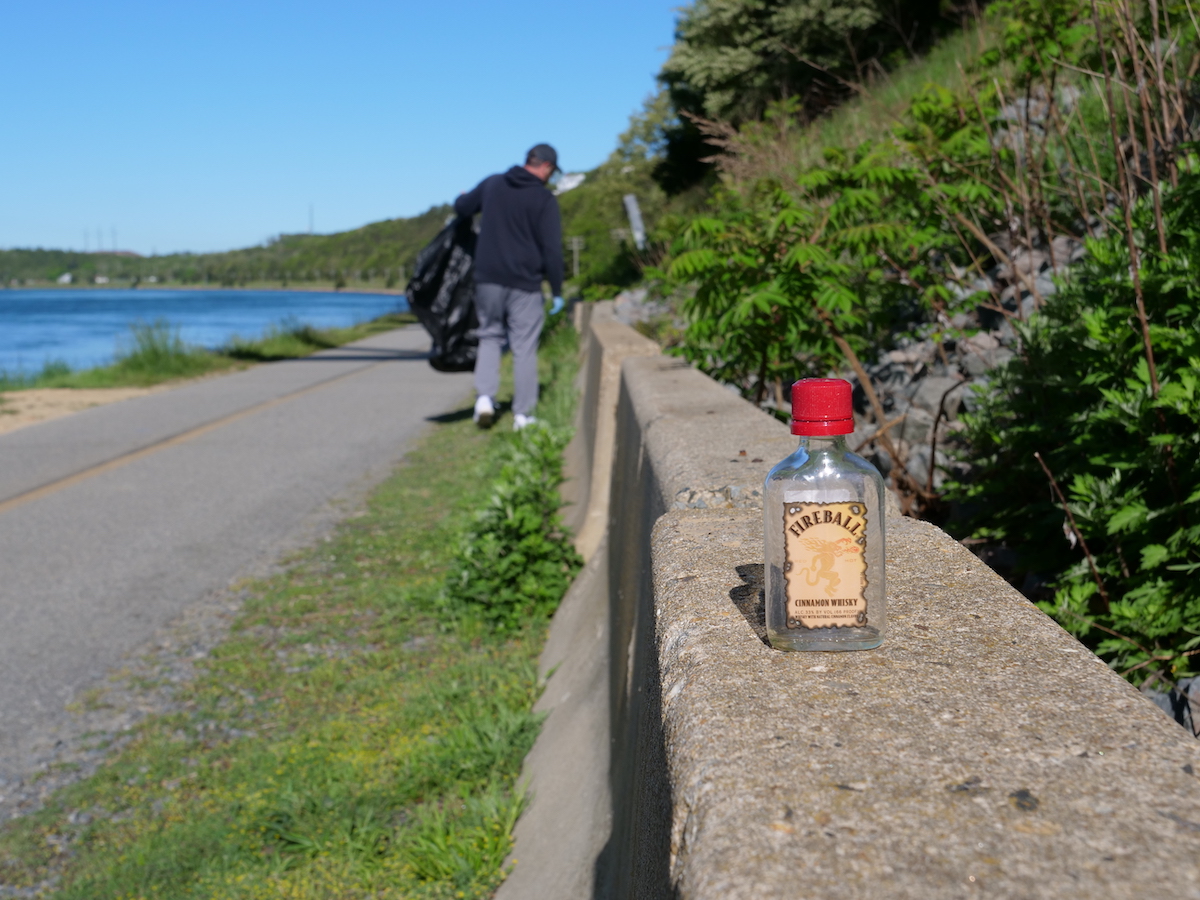 If you look close it's possible to find all sorts of stuff hidden among the rocks, weeds and bushes - from nips, to fishing line, and everything in between. 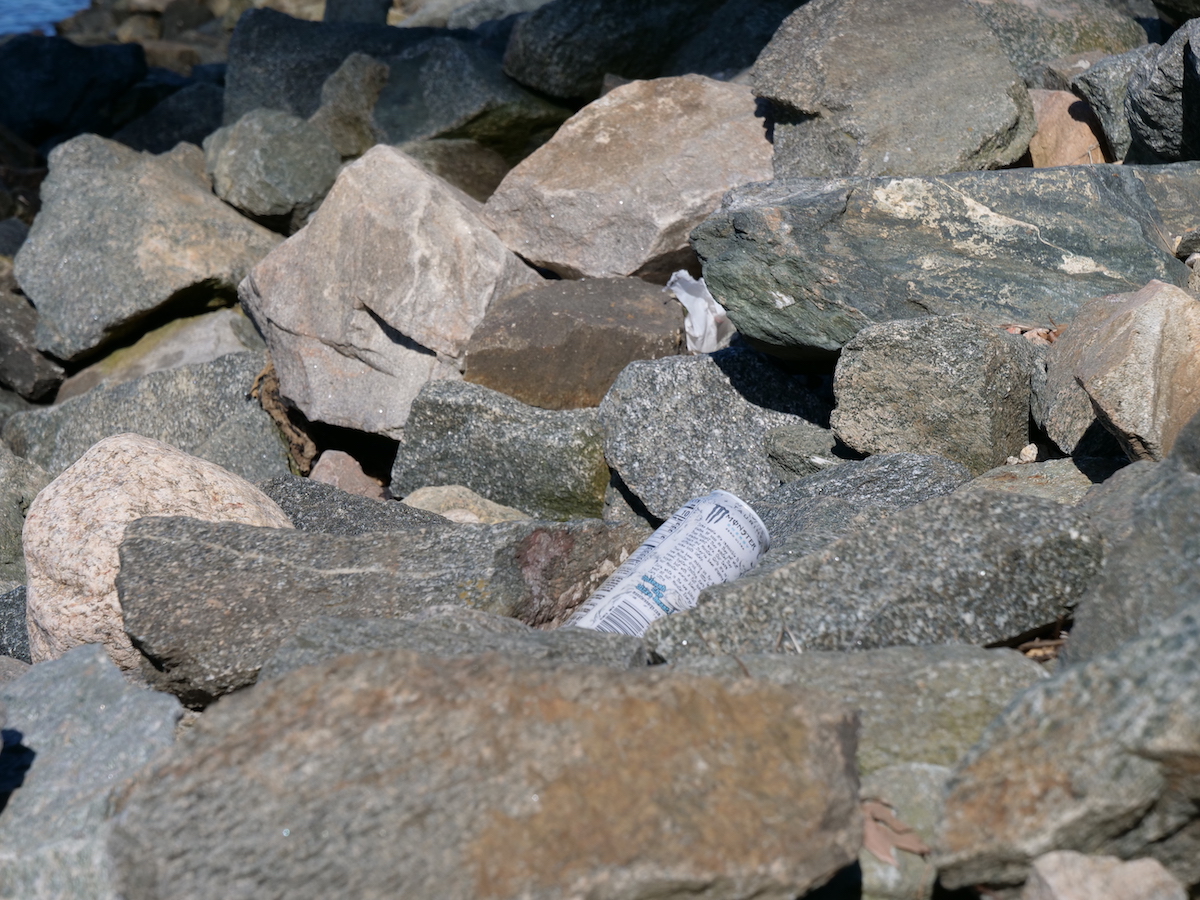 Not much good comes from complaining or pointing fingers at anyone, so I prefer to focus my energy on simply picking the stuff up.

Whether I'm at the canal or on the beach, the simple act of picking up other people's junk has become quite enjoyable (instead of making me angry or depressed).

During the course of the two hours we were at the canal, several people (including the Army Corp.) thanked us for picking up the junk.

One Army Corp. employee actually stated that he routinely fills bags of trash during his eight hour shift. There are also some hired workers who are paid to pickup trash along the canal. 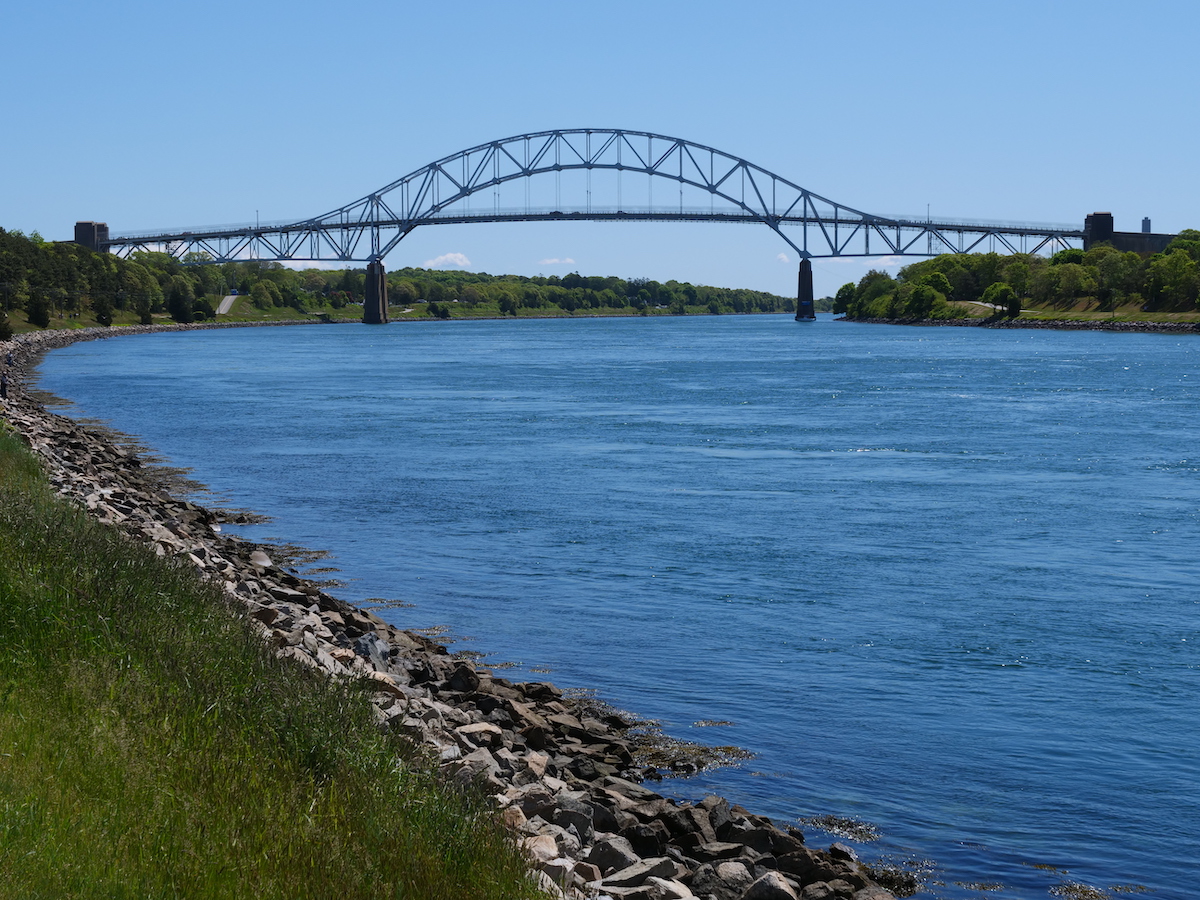 Between their efforts and ours (I mean all of us anglers), I believe we can really put a dent in the trash situation at the canal, and in other spots throughout Cape Cod.

Most of these areas are already very beautiful, and with a little extra trash-picking effort, these spots will become even more pristine.

Special thanks to my cousin Kevin, my friend Jeff, and his son Jared, for helping out with this min-cleanup. 🙌🏻