When I first started fishing the Cape Cod Canal I did a lot of watching, trying to figure out how to even have a chance to catch a fish.

I heard about jigging, but had no idea how to go about it, until I saw a guy catch a very large fish on a crippled herring at the East End.

This man caught the huge striper by jigging violently, with large upward yanks with his rod. I remember writing down everything I saw him do, and I tried to exactly copy his jigging technique during my next Cape Cod Canal fishing excursion.

As I began to spend more time at the Canal, I noticed a lot of people doing what I now recognized as "violent jigging." These people would yank the rod violently upwards into the air, every 5 seconds or so, as they slowly reeled-in their line.

Jigging with sharp upward "violent" jerks of the rod does catch fish, but is there a better way?
Video by Fish ﻿Monkey﻿.

I soon became a member of the "violent jigging" fraternity, sometimes having success, but most of the time not. This has made me question my violent jigging technique.

The question now is...

Going into spring of 2017, should I continue to jig the Canal with large violent yanks of the rod, or should I use a modified, more subtle approach?

My arm and shoulder sure would appreciate a more subtle jigging approach! However I have caught some good fish by violently jigging.

In an effort to get answers to my Canal jigging questions, I started to attend fishing expos like the M﻿SBA Expo in Hanover, and the New England Saltwater Fishing Show in Rhode Island.

I went to seminars and listened to speakers who recommended very different jigging techniques than the violent upward strokes I had gotten used to seeing (and using) at the Cape Cod Canal.

At this year's RISAA show I posed the same question to Al Gags during his seminar. Instead of a violent jigging action, Al recommends small twitches and shakes of the rod, at least when fishing his famous Whip-It-Fish lures. 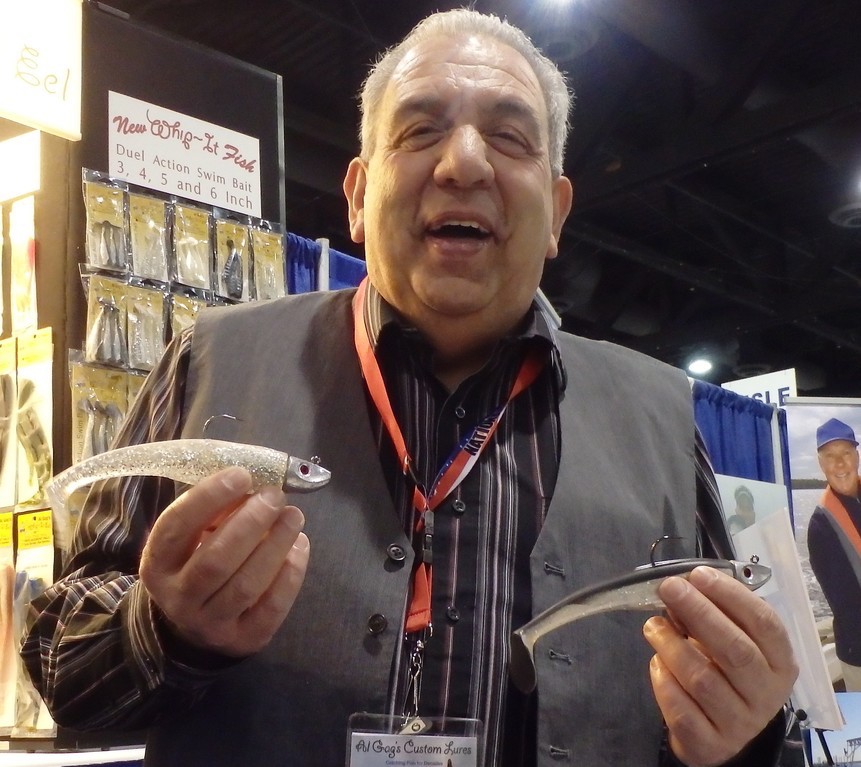 Al has made the observation that large violent yanks of the rod only succeed in pulling the lure away from the view of a potentially interested fish. It is important to remember that Whip-It-Fish have their own built-in swimming action, thanks to the bullet shaped head and paddle tail.

In fact, the very first fish I ever caught on a Whip-It-Fish was caught by letting the Whip-It-Fish swim in the current, with no extra action imparted by my rod.

So the question now is - "If violent jigging is not the best technique, then why does everybody still do it?" Author DJ Muller. Photo from the cover of his new book Fishing the Cape Cod Canal.

I remember DJ Mueller smiling and shaking his head when I described the violent Canal jigging technique, and I asked DJ if I should be jigging differently.

All of a sudden the light bulb went on!

Violent jigging is no longer necessary, because today we use low-stretch braided lines for jigging at the Canal. However, violent jigging was once necessary in the "old days" when monofilament (which stretches a lot) was the only option.

After talking with DJ, I returned to the My Fishing Cape Cod booth and started discussing my findings with MFCC member Tom Simpson. Tom told me that when he jigged the Canal with mono, it was like "fishing with an elastic band with all that stretch."

So now I have my answer. Although the violent jigging technique works, it is no longer necessary, and in some cases may move the jig too much, and actually be detrimental, especially when using todays low-stretch braided lines.

In conclusion, with today's braided line, violent jigging probably makes the jig look unnatural. Plus it is taxing on your body.

This season I plan on utilizing a more subtle jigging approach. If nothing else, I know my shoulders, arms and back will appreciate the change!